To make it down the East River and past Hell Gate on the right current we had to arrive at Throg’s Neck Bridge about 1:30 PM. Which meant leaving Mamaroneck at 11:30, for sure no later than 12:00. We showered fast, fueled up, and I hauled water. We knew our halcyon days of visiting Brewer marinas were coming to an end and we’d be anchoring or pulling up to closed docks for several days. There wouldn’t be any other chance to easily get water, fuel or food until Cape May, NJ.

Tom had to vandalize the marina’s shower by removing the shower head and rigging a hose to fill our jugs, as all other water in the yard was shut off for the season. (He did put it all back together.) Then I had to load the 5 gal jug and a bag full of 1 gal jugs on our folding hand truck and wend my way through the maze of stored boats, railway tracks and various concrete ledges between the shower room and the gangway to the floating dock. I had to load and unload the dolly several times each trip. Back and forth I shuttled while Tom bought oil, checked the oil and the coolant and futzed with the engine. I managed to surprise myself by overfilling the tank sooner than expected. But I also managed to run the wheel of the cart through a glob of the industrial strength grease that they use to lube the travel lift and the clean up job took far too long. That stuff was intense and had squeeged itself into every crevice of the wheel and surrounding brackets. Always do something to increase the stress level when trying to make a schedule, that’s my motto.

All our tasks done, we pulled out of Mamaroneck in the nick of time. And there was a barge and tug steaming toward the opening we were heading for at Execution Rocks. We slowed slightly to let him go first. Maybe too much, it’s hard to judge.

What a pleasant way to start a day of sailing … heading for Execution Rocks. But it wasn’t as bad as it sounded, we followed that ship through and all the way to the bridge, knowing that if he could go there, we could go there without paying the ultimate price. Unfortunately, when we caught the wake of the tug the compass rolled with our motion, as it’s supposed to – and stuck – uh oh.

The next day – Christmas Day that is – we planned to head out into the ocean for the trip down the New Jersey coast. No way we were doing that without a functional compass. I found a West Marine in Manhattan and then began the search for a place to dock the boat while Tom sprinted in to the store to buy a new one.

The one dock that our cruising guide showed on the East River had moved over to the other side of the island. The guy who was manning West Marine – alone, on Christmas Eve – was from Florida and had no idea how to tell me to execute this maneuver before they closed for the holiday.

Tom sweated that compass problem all the way down the river. I could not get any more information on where to dock. Neither of us could really enjoy the sights of New York. We finally gave up and resigned ourselves to the idea that we would have to stay an extra day in order to get a new compass. Either that, or stay up late trying to fix the old one. We do carry a quart of compass fluid – thanks to Paul Dennis. 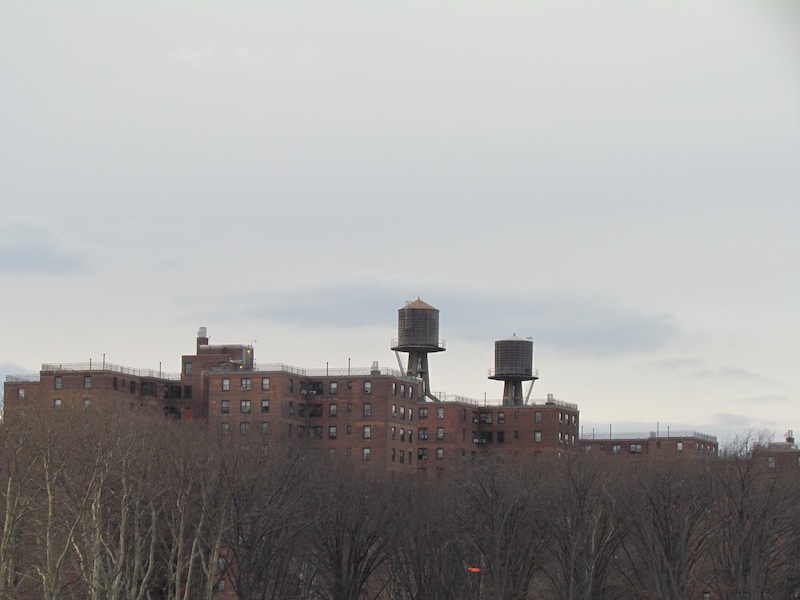 The water towers of New York have always intrigued me.

At each bridge and bend of the river there was something new and interesting to see. We’d been warned, copiously, about the shipping traffic and currents we’d encounter going through the East River. We found it easy and smooth. Tom had calculated the currents right, and Christmas Eve turned out to be a grand time to avoid ship traffic.

The only place we ran into any traffic at all was right at The Battery, the tip of Manhattan, where the Staten Island Ferries and the water taxis churned up a huge chop. Cresting waves broke on us from all directions. The water taxi drivers lived up to all we’ve heard about Manhattan cabbies, they never slowed down, and they didn’t care if they sent us skyward on their wake. We just accepted the roll and tried to maintain course and stay out of their way. We monitored Channel 13 and nobody cursed us out. They were all busy wishing each other Merry Christmas.

The cabbies did us one huge service. We hit that turbulence and the wild motion broke the compass free. By the time we motored across the Hudson to the Statue of Liberty it was swinging again as it should. 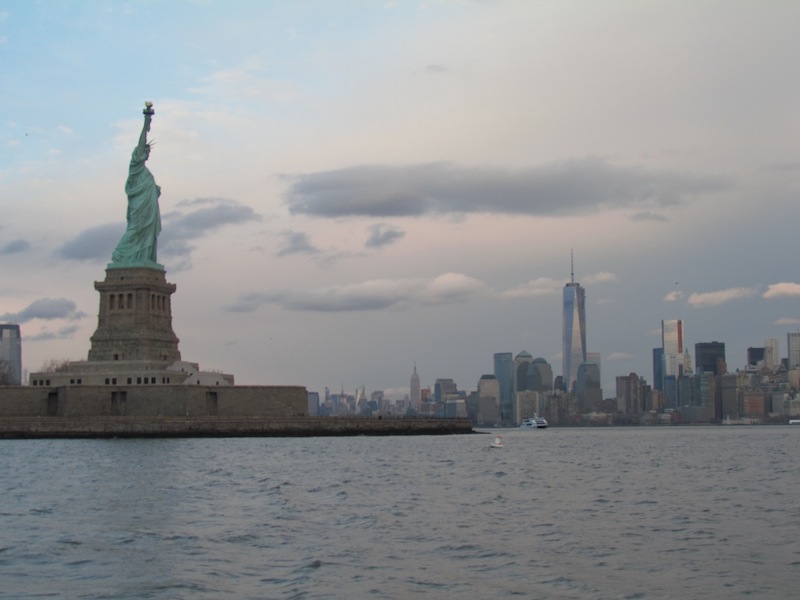 Liberty and her city

With sunset tour choppers buzzing the statue like bees, Tom dropped Sunshine’s Christmas present, a new Rocna anchor, behind Lady Liberty at Liberty State Park. We enjoyed  a Christmas Eve dinner of Italian sausage linguine and toasted our successful transit of New York. Then the wind picked up and swung us around a good bit, but the hefty Rocna held us fast for a long winter’s nap.

Next Installment: Christmas Day on the ocean – with dolphins!

Read the whole story of our Escape from New England

Chutes and Ladders in Atlantic City

Red Nun 2CM I think I love you