The day after Christmas, Atlantic City taunted us. The peak of a slant-roofed tower rose out of the sea soon after we left Manasquan. It continued to grow all day and was joined by other, smaller towers, but for hours they remained Atlantis-like, half-sunk in the ocean. It seemed they would never draw closer, we would never get there.

The experience of actually being in Atlantic City was very similar. But I’m getting ahead of myself.

Another fine winter day on the New Jersey coast

The day was beautiful but cold. I spent the day in my red foul weather coveralls, a gift from my friend Candace. I might wear this next Halloween and go as a Transformer. 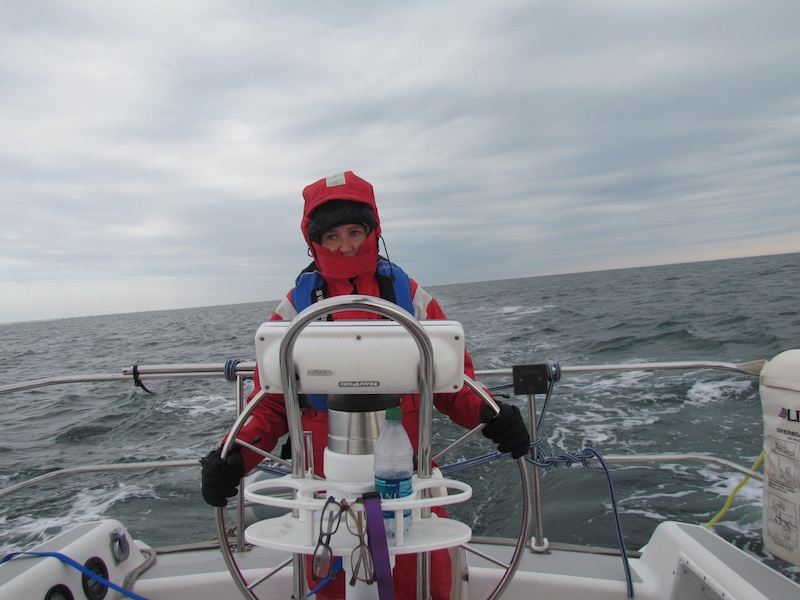 Soft rollers came from our seaward side, and the north-west wind blew from shore at about 10-15 knots, setting up a bit of chop. From a couple of miles out to sea the Jersey shore looked as inviting as it might in summer, but there was no one on the beach. We hoped for another visitation of dolphins, but they too stayed away.

After several hours we finally got close enough to Atlantic City that solid ground materialized for the sleek, gleaming buildings to sit upon, and seemingly moments after that we were sailing into the inlet past a battered section of boardwalk left over from Hurricane Sandy. At sunset we tied up at the state marina at Golden Nugget Casino, helped and advised by a friendly fellow live-aboard who keeps his own sailboat there.

I was really looking forward to checking out Atlantic City. It’s figured large in so many books and movies, and of course all the Donald Trump noise. And then there’s that famous boardwalk touched upon by Springsteen, 60’s boy bands, and last but not least, Hurricane Sandy. Best of all though, we wanted to walk the streets that were named for our favorite childhood board game – Monopoly!

As darkness fell we cleaned up and headed ashore to find something to eat. First stop, The Golden Nugget which turned out to be a little too smoky, a little too brassy for our taste. The clientele all looked as if they worked in casinos and dive bars in other beleaguered cities. The floor would not stop moving underfoot, but that was my own problem. We started looking for the way out and found ourselves stymied at every turn. Which was our first clue – Atlantic City casinos do not want you to leave. There’s a Stephen King horror story lurking in that fact.

After asking a clerk in one of the shops, we learned that what we would have to go out the way we came in and get on a Jitney, a small bus that shuttles folks between casinos, because, surprise, you can’t walk from one to the other. They’re liked walled fortresses, cut off from one another by vast parking lots, winding freeways and tangled overpasses that appear to exist solely to funnel cars, and the credit cards inside them, into casinos. 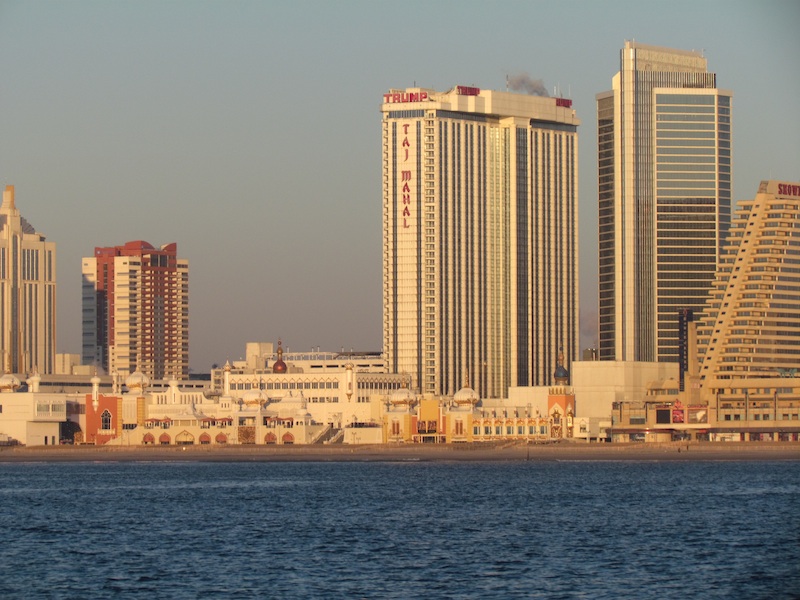 Aboard the Jitney I asked other passengers where we might find some restaurants. I was hankering for Indian food – perhaps inspired by Trump’s Taj Mahal, which I’d seen from the ocean. I asked specifically for a place not in a casino. I got blank looks. All recommendations were for restos inside casinos, in particular The Borgata. I told them I wanted to walk because we’d been on a boat all day and wanted to stretch our legs and that I’d really like to walk to the Taj Mahal because I’d heard so much about it. A couple of young women shook their heads. They told me it was possible to walk between casinos down at the boardwalk, but advised against doing that. Not only was it cold, but it was sort of dangerous. That’s not a good place to be after dark was the way they put it. They directed us again toward Borgata. Hungry, we gave up and asked to be let off there.

While all this discussion was going on, the Jitney had circled the Golden Nugget parking lot, gone around the building and headed toward Borgata, which we’d seen was the next tower over. Now it took a series of freeway-style on ramps and off ramps, wound around some more, circled Borgata, drove through the hotel’s parking lot and wound between porticoes and outbuildings. No exaggeration – it took 20 minutes to drive from the Golden Nugget to the Borgata though they are located next to each other. We could have sailed there faster.

The Borgata was indeed much nicer. But in Atlantic City increments. It was similar in style to an mid-level tribal casino in our native Washington State. It was nothing – let me repeat that, nothing – once again, nothing like Vegas.

Sake to make everything shiny again

Thinking the buffet would be our best deal for dinner, we headed there first, to find the price was something like $39 per person. No buffet is worth that. We did a quick 180 on the heaving floor and headed to N.O.W. the Asian fusion noddle bar instead. We had a decent meal plus sake (I love sake) for less than half what the buffet would have cost for one. That must be one great buffet. Buffets are a problem for us anyway. We simply don’t need that much food, but once you’ve paid so much you want to make sure you get your money’s worth and end up over-eating. A bad business when sailing since we can’t get out and run around and work off the excess.

All in all it was a fun evening, but the next morning we got up early and headed back out to sea, happily leaving that wired and clanging Atlantis in our wake. 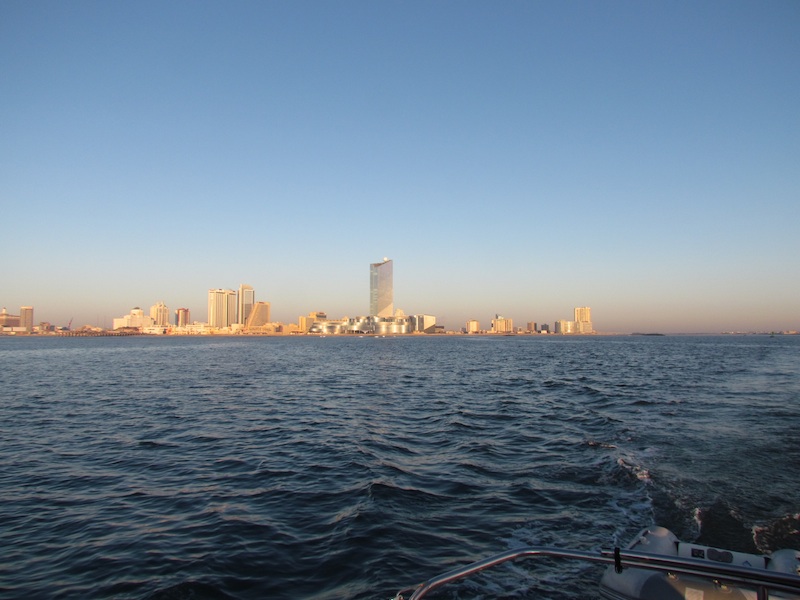 Someone please take us to task for our snap judgement and set us straight on the hidden charms of this iconic American town. We know we’ll need to give AC a bit more time when next we make a passage along the New Jersey shore. Which we’ll hope to do in warmer weather so that we can get outside and see it our way rather than from the canned, and managed perspective provided by the big hotels.

Next Up – Red Nun 2CM I Think I Love You

Read previous posts about the Escape from New England

8 thoughts on “Chutes and Ladders in Atlantic City”