It’s been hard to get out to /on the water lately. Busy days, early sunsets and freezing temperatures have conspired to keep me inside the office, my car, various shops and the house.

But I have been keeping track of the sunrises over the last few days. Whether colorful or not, they’ve been stunning. 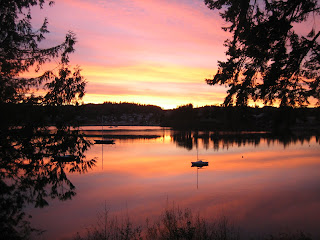 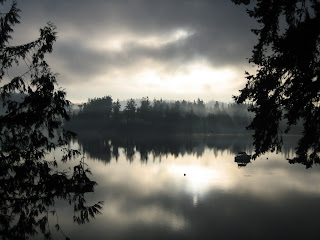 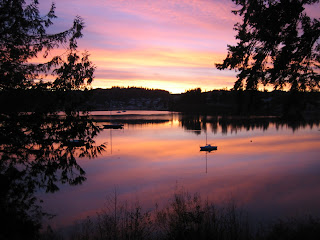 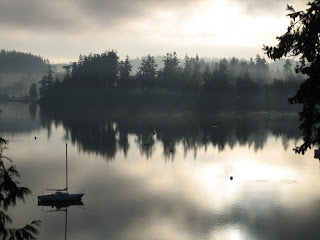 This morning I finally got a few moments to watch the more animated forms of nature.

A flock of late geese flew up off the harbor and headed north. I wondered a little at that, then saw them again, they were hard to miss as they let me know they were coming. This time they were headed in the correct direction with a second flock coming up off the water to join them.

The kingfisher was back at his post atop Nameless’ mast. This is his favorite spot, I suppose because there he’s closer to the water than on either Diva’s or Bandit’s lofty heights.

A hummingbird buzzed along the sunny bluff face. I’ve been wondering what they are doing still here and where they are finding food these days.

Five or six blue heron’s rushed by, startled from the rookery up the hill. Because herons are typically so solitary it occurred to me, for the first time ever, to wonder what a group of blue herons is called. First guess would be “a lonesome” because they usually appear one at a time, or “a rookery” because that’s where they live. But rookery is reserved for penguins.

I’ve always loved to ferret out the words for groups of animals. There’s a lovely book about it called An Exaltation of Larks. An exaltation, that’s got to be the most beautiful group name. But I also love the enchantingly spine-tingling “unkindness” of ravens. Then there are the odd ones, for some reason a group of goldfish is “a troubling,” and the utterly fitting ones, “a parliament” of owls.

This kind of terminology can apply to the human animal as well. In one of his essays, Patrick McManus (a writer hero of mine) wrote:

“As a group, spouses of fishermen off on a three-day lark, or even an exaltation of larks, are variously a crash of wives, a leap of wives, and sometimes a murder of wives. Often a single wife will appear to be a whole group under these circumstances and it is all right to use the appropriate group term, if you get the chance and think it will do you any good.”
From The Grasshopper Trap.

Ahh, I found the term for a group of herons. “A seige.” I knew it would have to be something pretty dramatic. When five or six of them swoop past your head the hair stands a little bit on end.