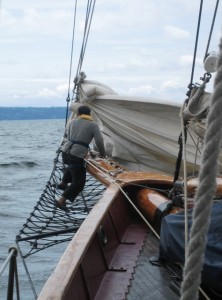 This spring Partners in Preservation aimed a promise of one million dollars at the Seattle area, with a competition for grants to restore, preserve and maintain historic structures in the Puget Sound region. When the list of candidates came out, Whidbey Islanders rallied around a favorite Coupeville landmark, the Ferry House, which stands on the prairie above Ebey’s landing.

As I’ve never been a particularly decisive person, nor a fiercely-loyal-fan type, the question of which of the twenty-five worthy edifices should claim my allegiance caused me some angst. I love the Ferry House and want to see it protected and maintained in its picturesque bluff-top setting, but my appreciation for historic places in general made it difficult to vote for one building simply because it happens to be located a few miles up the road from my house. I wanted to vote not just early and often, but generously. I wanted to vote for all the buildings, from the Spanish Steps in Tacoma, which, as far as I know, I’ve never seen, to the University of Washington’s observatory, which I parked near and walked past almost daily back in my student years.

Complicating the choice even further was the inclusion on the list of the Bowman Bay kitchen shelter on Fidalgo Island, at the north end of Deception Pass. The tiny building is an example of my favorite style of architecture – those national park structures built of indigenous materials and rough hewn craftsmanship that seem to rise up out of the earth. Buildings of this sort figured large in my childhood, we were a camping family and often visited Deception Pass, so the kitchen shelter was number one for me. But I knew that in the world of high finance grant making, especially when it came to popular vote, Bowman Bay was too remote and the structure too small to catch the attention of many others.

The next decision-making difficulty I had to overcome was the fact that a large percentage of the structures on the list had something to do with water or maritime history. As a writer whose subject is all things marine, I could hardly ignore the Customs Building in Port Townsend, the Skansie net shed in Gig Harbor, and of all things, a seagoing National Historic Landmark vessel, the schooner Adventuress.

When it comes to a race between buildings on the waterfront and a schooner, the boat wins every time, and sure enough Adventuress stayed at the front of the class for most of the month long competition. Throughout the month I remained primarily faithful to the local favorite, the Ferry House, wanting to help keep it in the running since it actually stood a chance of coming in fourth or fifth and thereby winning some of the money. But I also gave the Bowman Bay shelter a token vote here and there just to let whoever might be collecting data know that someone cared about the underdog. And because I couldn’t help it, I cast a few of my votes Adventuress’ way, especially toward the end of the month when the large, grand and high profile Town Hall Seattle began to creep up on her stern.

Of course being a writer and being a sailor and being a preservationist, I had to spout off about the competition on Tidal Life. Adventuress caught wind of that somehow and within a day I found myself corresponding with Zachary Simonson-Bond, Development Associate of Sound Experience, the non-profit which owns the ship. In due course I learned that Zach was the force, or should I say gale, behind the highly successful Vote for the Boat campaign. Waged largely through social media, Vote for the Boat went viral. Witty videos, some produced by and starring Mr. Simonson-Bond, others by fans, crisscrossed the country. Captivated by what they were doing and the story of Adventuress, I wrote about the campaign and did my bit to pass the word through social media as well.

Long story short, once Adventuress had crossed the finish line and secured a $125,000 grant to fund restorations, Zach invited me to come aboard. So on Saturday while the rest of Whidbey was paring down to tank tops and shorts, I donned several layers of fleece, packed a rain coat and gloves and headed for the Everett Marina to finally see what all the fuss was about.