A few days after Hurricane Sandy walloped New Jersey, another big nor’easter was forecast to douse us with rain, toss things around and possibly put the lights out. Which meant it was time to head for Rhode Island to pick up the gooseneck part our machinist had finished. Rain is now another word for road trip. 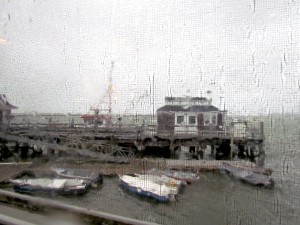 What is a Nor’Easter?

The locals tell me that a nor’easter is like a winter hurricane. According to Wikipedia, this type of storm targets the Atlantic coasts of the US and Canada and “has characteristics similar to a hurricane. More specifically it describes a low pressure area whose center of rotation is just off the East Coast and whose leading winds in the left forward quadrant rotate onto land from the northeast.”

An interesting side note is the small tempest over the term nor’easter, with some folks claiming it’s a faux word, never really used by mariners.

“For decades, Edgar Comee, of Brunswick, Maine waged a determined battle against use of the term “nor’easter” by the press, which usage he considered a pretentious and altogether lamentable affectation and the odious, even loathsome, practice of landlubbers who would be seen as salty as the sea itself. His efforts, which included mailing hundreds of postcards, were profiled, just before his death at the age of 88, in The New Yorker.“

University of Pennsylvania linguistics professor Mark Liberman has pointed out that while the OED cites examples dating back to 1837, these examples represent the contributions of a handful of non-New England poets and writers. Liberman posits that “nor’Easter” may have originally been a literary affectation, akin to “e’en” for “even” and “th’only” for “the only”, which is an indication in spelling that two syllables count for only one position in metered verse, with no implications for actual pronunciation.“ – Wikipedia

Whatever they’re called, I’ve always liked to watch storms at the edge of water. And since we hadn’t made it out to Cape Cod yet, we headed east to see big waves crash on the beach. By the time we left Hingham the wind was howling, but as we got closer to the coast it picked up considerably.

The Storm and The Pilgrims

It was dramatic enough at protected Plymouth, where we braved the gale just long enough to get a glimpse of Plymouth Rock and the Mayflower replica and have some fish and chips at the marina. 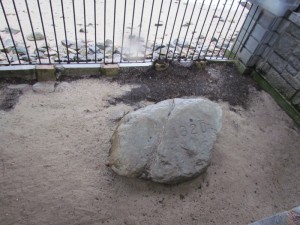 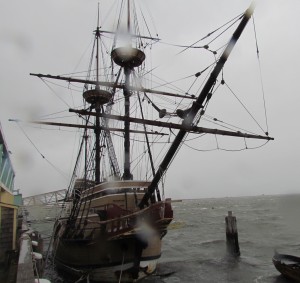 I’d always heard ships of the time were small, but that 100 foot craft is shockingly tiny to carry 102 people and 30 crew for 66 days across the Atlantic. And this storm was a sample of the kind of weather they must have been sailing through before landing on the exposed Massachusetts shore in November. No wonder half of them died the first year. I began to mull the question of what makes people leave their homes and head into life-threatening situations.

Some of my friends and family (my mother for sure) may roll their eyes at that. But Tom and I are doing our sailing adventure for fun, and we’re geared up with high-tech personal flotation devices, VHF radios, cell phones and navigation software. We’ll be merrily hopping from one well stocked port to the next, and not cramming our cabin with passengers.

How bad do things have to get at home for people to put themselves in harm’s way like that? Humans are drawn to, but also have a healthy fear of the ocean, yet boat people regularly try to escape oppression in leaking, top-heavy, semi-floating devices. But by the time they left for America, the pilgrims weren’t oppressed. They’d already moved to Holland where they were living and worshiping the way they wanted. At that point apparently, they were unhappy with the fact that when their kids grew up they decided not to be separatists. In essence, what the pilgrims wanted was freedom to oppress their children.

Imagine feeling so right in your interpretation of scripture that you couldn’t let your child speak Dutch in addition to English. Imagine instead choosing to subject your family to deprivation, fear, sickness and potential death at sea, to get to a little known land, then work for years to pay off the investors who put up the money to get you there. Of course there’s much more to the story. They were driven by intrigue, politics, economics, perhaps a psychosis of some kind. Or maybe it was just the adventure. Maybe for some of those men the religious persecution was just an excuse to throw off the shackles of boring, everyday life and go do something daring. If so, I guess I can relate.

Puzzled by Puritans, we left Plymouth, following the one inadequate map we had in the car and found Nauset Beach, near Orleans. This appeared to be the first place we’d come to on the Cape where we could drive close to the ocean. It was getting kind of late in the day and our foul weather gear is still in storage, so a long hike was not in the cards. We just wanted to see the surf. Nauset gave us quick access to the dunes.

It’s amazing how often I arrange things so that I have to see something very special very quickly. I’ve done these surgical strike style visits to the Giant’s Causeway, the Alhambra, the British Museum, the Louvre and the Van Gogh Museum, to name a few. It kills me to be close to something cool and not go see it. This habit will have to change, as sailing is a slower method of travel than automobile.

When we arrived at the beach I couldn’t resist getting out in the weather. Camera in hand I jumped out of the van and “ran” down the boardwalk against the wind. Very slow, that run. The wind blew sand at me so hard I couldn’t see. I squinted, tipped my head so the top of it was pointing north, and held my hood out at the north side to try to shield my eyes and nose from the stinging sand. I wrapped my favorite blue scarf/pareo/towel/sling around my face. Even so, I breathed sand, got sand in my eyes and between my teeth. I finally turned my back to the blowing sand, and let it beat against my shoulders. It was like being sand-blasted. I couldn’t take a picture to the north because the sand would have pitted the camera’s lens, so my fuzzy, jiggly  video shows only the east, south and west angles on the beach.

The waves were big, hectic and coming fast. When I first made it to the beach it was wide, the waves out a significant distance. Had I been able to breathe I’d have walked closer to the water. But in the five minutes it took to fool with my hood and scarf, take a little video and adjust my position against the wind, the waves were flinging themselves almost to the foot of the dunes where I stood and I was glad not to have been foolish enough to venture closer.

Even with my scarf over my mouth and nose, a fleece under my raincoat and my hood up, I couldn’t stay warm or keep the sand out of my eyes. It’s an environment you really have to prepare for. I marveled that any pilgrims survived at all.

The Nor’Easter and Sunshine

On our way back home Thursday night, we drove past snow but there was none at the shipyard. The wind continued all night, along with a little rain. We found the hatch is water tight, all the hardware holes too. We did a little happy dance over that. The companionway still lets a drip through, so something more needs to be done there.

Jackets on, we plugged in the power, turned on the heaters and cooked dinner. By the time dinner was ready it was 65 inside, with the humidity of a rainforest. I need to figure out some meals that don’t require boiling, simmering, i.e. steam. Some nice dry dishes, maybe quesadillas. I’ll consider roasting a tiny turkey.

On Friday morning the sun came out after a long couple of days under gray clouds. The wind continued to whistle through the shrouds and along the walls of our yacht canyon. The halyards continued to clank and hum. Sunshine continued to shake slightly with the gusts.

Looking out the transparent companionway door I saw masts, striped along their eastern sides with the lemon butter light of sunrise. Much better.

Through the long port light over the galley I saw rust colored leaves still clinging to branches though the wind was encouraging their departure. And that reminded me of the witch trees we saw here and there along our route.

Late as usual, I only noticed these trees after Halloween, gnarled oaks that grow different from the rest of the grove. I called them witch because they seemed to reach contorted, angular limbs out in gestures reminiscent of the grasping, hexing arms and hands of the Wicked Witch of the West. As we drove rural roads out to Cape Cod and through Rhode Island I was reminded over and over again of Sleepy Hollow, The Brothers Grimm and the Wizard of Oz. While green in the summer and colorful in the fall these trees were just trees, but with their leaves stripped away, and swaying against an ominous gray sky they took on a ghoulish aspect.

What’s Next in the Wind?

Back to work, we still have to see which way the wind blows every day. And often it’s not the direction we’d planned. Though we’d like to be finishing the engine and electrical systems, we’re instead stuck trying to find an 8″ long 5/8″ Hex Head Cap Screw to attach the new gooseneck to the boom. 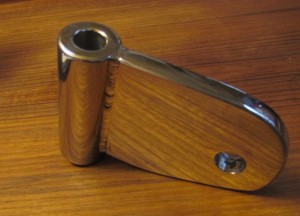 In Plymouth we watched a stop sign spin back and forth so that the one way arrow at its top pointed in every direction. Watching it, I was inspired to do my impression of the scarecrow, arms pointed both ways. That seems about right for us. 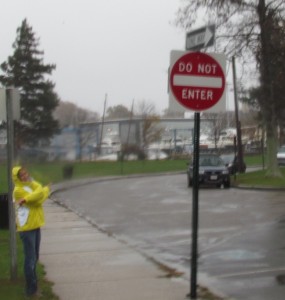 2 thoughts on “Nor’Easters, Machinists and Pilgrims, Oh My”