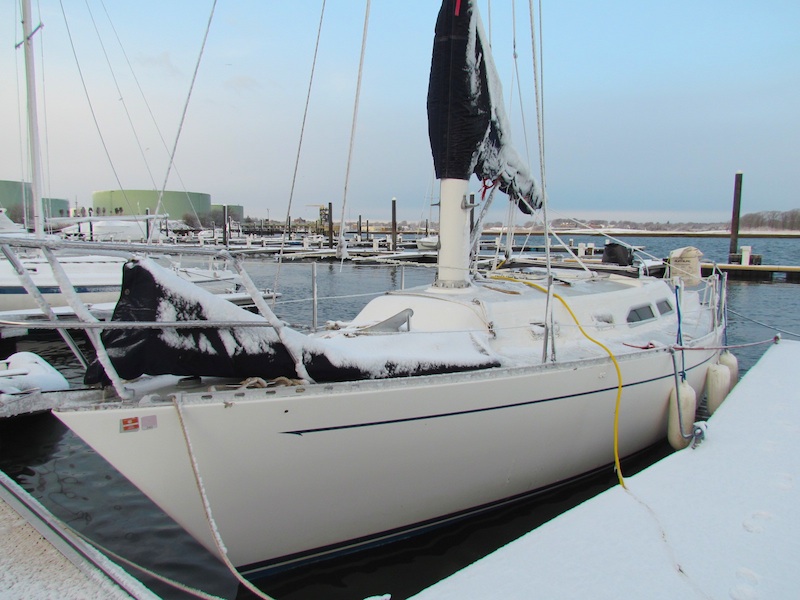 Not long ago, I said publicly that we would not be in Boston for Christmas. Which led to another excellent episode of word eating.

I really never imagined we’d be living aboard in the winter in such a cold place, and neither of us planned for it. We were all “leave the warm clothes behind, we’ll never need them again.” Hah!

I’m writing posts about the details, but for now suffice it to say that everything takes longer than expected when you take on a boat rescue project. We were down to the wire with every part of the job, launching in December, hoping to be able to sail south one step ahead of the bad weather. Plus Hingham Shipyard Marina – about which the less said the better – was closing for the winter. We either had to store the boat until April, or leave.

So we bent on the sails, got the engine running with the help of our mechanic friend Jason – about whom much will be said in a coming post – and worked through the nights to rearrange our belongings in boat, van and storage unit.

I got us a slip for a few days at a nearby marina that’s live aboard friendly. We planned to use those days to do some sea trials, do a proper job of stowing, empty the storage unit and finish the work on the electrical system.

We were thrilled to have Jesse come along for the ride to the new marina. He was a much needed guide to local waters, moral support and backup for Tom as far as engine operation and general boat systems knowledge. He’s also a lot of fun and impervious to weather.

Casting off the lines from the site of all the hard work and stress gave us a wonderful feeling of freedom, which was a large part of why we bought the boat in the first place. Even better was motoring along under our own power – what a great payoff for a long project.

But everything couldn’t go that smoothly right? As we neared the new marina there was a bad noise from the engine room. I throttled down and put it in neutral while Tom went below to find out what had happened. He found that the stuffing box had spun up the propeller shaft and lodged against the transmission coupling. The engine ran fine, but we couldn’t shift into forward or reverse.

While we had no engine propulsion, the wind was blowing 25 to 30 mph, so I steered for the nearest mooring buoy and Jesse and Tom tied us to it then went below to see about repairs. When it became clear they weren’t going to be able to fix the transmission at sea, Jesse, who has a membership in TowBoatUS, the marine equivalent of AAA, arranged a tow. Then we were REALLY glad he’d come along! Boating friends are the best.

Unfortunately this all happened just a couple of days before Christmas. Everything was shut for the holidays. Jason was off for Christmas vacation. It looked like we might have to replace the transmission. Black clouds hung over our heads.

They say the worst thing to have aboard a boat is a calendar. After licking our wounds, we decided to jettison ours and embrace the idea of winter in Boston. It was harder than I make it sound. We had to let go of our hope to get south, and we did do some fretting over the next several days about just how bad the damage might be and how much the repairs were going to set us back.

After Christmas, Tom called Jason – whom I have now dubbed The Yanmar Whisperer – and explained what had happened. In less than half an hour they’d worked through the problems and the engine was running and the transmission was shifting. Jason is a wonder. With things working again, it’s possible we could make a run for it given a string of nice days. But we probably won’t push it.

And So, What Now?

First up is a trip into downtown Boston to join in the New Year’s eve celebration, which they call First Night. While debauching, we’ll be thinking hard about what we’ll be doing in 2013. On the 2nd Tom starts some design and consulting work for a small remodel project. I’m continuing my website work and writing. Then there are all the people who told Tom, “if you were staying here I’d have you do x.” We’ll be working here in the city for the next few months.

If the weather cooperates we’re hoping to take the boat out briefly for some further trials, but of course now we’re into winter storms, so we have to plan carefully and stay close just in case we find other issues. We’ll probably be hauling Sunshine to replace the stuffing box, which is old and leaking a bit more than we’d like.

Our biggest immediate need is to learn the ropes of living aboard in cold climates, a subject we previously ignored with gusto. Constitution Marina in Boston is home to some 75 live aboard families, so we’ll go haunt the docks and hope to run into a few of them and scare up some helpful hints.

Winter Live Aboard Basics: What we know so far

We have to stay warm

We’ve got an oil filled radiant heater on our side. Jesse loaned it to us and it’s wonderful. Supplementing that is a ceramic box heater. It turns off if tipped over, an excellent characteristic for wind and waves. These are good as long as the power stays on. We’re looking into options for when it goes out.

Though we left Washington with the intent to never do another winter in the north, I did surreptitiously slip in a duffel bag of winter coats, hats and mittens, several woolie blankets and two sets of thick sleeping bags. Did I jinks us?

We Need Food and Water

Here’s a side benefit of winter – we now have a freezer. Which allows me to buy larger packages of meat and save some money. Meat specials are almost always tied to bulk buying and when we were relying only on our small icebox (haven’t run the refrigeration unit yet) I was unable to take advantage of sales. Now I keep a plastic bin of meat in the lazarette or cockpit.

Everyone around here shuts off and drains their outside water systems for the winter. Marinas included. So we’ve had to haul drinking water in bulk. We could have the big carboys delivered to the marina, but we’ve just bought several gallons at a time at the grocery store for about the same price. Now and then friends let us fill the growing mountain of jugs from their kitchen taps. We haven’t settled on the perfect method yet.

Dealing with Ice and Snow

In the Pacific Northwest the worst case scenario for a winter live aboard would be to get one of our freak huge snow dumps followed by a big rainstorm. It’s an infrequent occurrence, but when it happens it can sink a boat. Here in New England the worry is getting frozen into the ice, which can damage a hull, plumbing etc. So a first step for us is getting a deicing mechanism in place. These devices keep the water moving around the boat so it can’t freeze.

Blocking off cold air and dealing with condensation will be the two big ongoing challenges for us. The live aboard forums are full of advice, some of which (like getting a dehumidifier) we plan to try, and some (like insulating the hull) that will have to wait. At the very least we’ll be insulating the companionway, the hatches and the head port light.

“You need to get a shovel,” says Stacey, usually just after she’s said, “I told you you’d be here for the winter.” We probably need at least two shovels. A small plastic one for scraping snow off the decks and a big metal one for digging the van out of the parking lot after the plow has been by. A third may be needed to keep the dock walkable. Or maybe some salt. Salt and chemical deicers are on my bad list as recent studies have suggested that human activities like road clearing and pasta cooking are increasing the salinity of the oceans.but reality intervenes.

This is what boaters do around here, whether storing or living aboard their boats. We’re considering it but if we have to haul for repairs we’d have to take it off again, so it may not be logistically feasible.

Daily Life in the Dark and Cold

Just as we used to on land, we’ve got all these on hand. No candles though.

Our stove runs on alcohol which doubles as a heat source but contributes to condensation. It’s also slow and costs a fair bit so I’ve devised ways to shorten cooking time. We invested in a small microwave, which has been worth the space it takes up because it eases the reliance on the stove. We also have an electric kettle. I preboil any cooking water before firing up the stove.

There’s a lot to get used to. We’ve settled into the different motion and prepared ourselves to endure the winds. The latest thing to wake us in the night was a chunk of frozen snow falling from the mast onto the cabin. As Jesse reminded me when we were waiting for the tow boat the other day, “Bob Bitchin, editor of Cruising Outpost, says the difference between an adventure and an ordeal is attitude.”

No matter what happens, we’re firmly on the side of adventure.