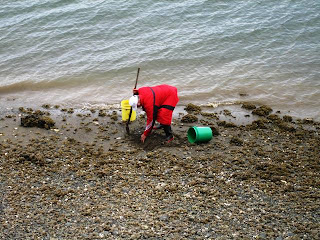 In the spirit of Marie Antoinette, this year I let Dad dig his own while I watched from above.

Not really, after a few minutes the guilt got to me and I joined him. Besides, I wanted to keep a few for dinner. 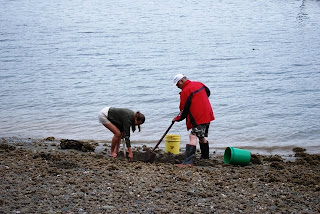 Eventually almost everybody got their hands in the muck. 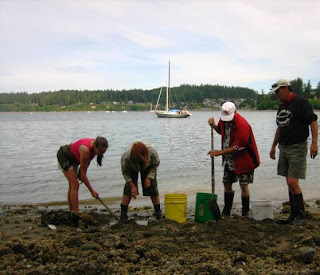 A few years ago, when my shovel started turning up unusual purplish clams I tossed them back in the hole with hardly a thought. But as the number increased and invasive species became news I began to suspect things were going to change, one way or the other.

The microscopic offspring of purple varnish clams arrive in bilge water that collects in the bottom of boats and ballast water taken on by ships carrying light cargoes. Ships pump it in one place and pump it out another, efficiently transferring creatures all over the world. It’s a practical solution that’s created a huge problem. We should have seen it coming. The term bilge water is used to describe lies, drivel and nonsense and as a name for slimy characters.

The idea of foodstuffs imported in bilge water doesn’t immediately whet the appetite. But realizing I’ve been mindlessly selecting the purple varnish for survival by leaving them on the beach to reproduce while removing butter clams and little necks, last summer I pushed squeamish emotion aside and applied cold logic. Somewhere in the world, somebody must eat this species. I would too.

Nervous, sweating, ready to bail at the slightest sign of odd behavior, bad smell or questionable taste, I dug a dinner’s worth of purple varnish clams, left them overnight in saltwater and cornmeal, and cooked them. Then I ate them. With melted butter, naturally.

I lived. I can still move my arms and legs. I pronounce purple varnish clams perfectly good to eat. They taste much the same as butter clams, maybe a little more tender. Folks who find clams rubbery might actually like the purple ones better.

A constant stream of news tells of problems with invasive species. Land invaders are often introduced intentionally by gardeners smitten with lovely flowers. Sometimes the plan goes awry, as anyone who’s battled the most famous pest of the northwest, Himalayan Blackberry, can attest.

Legal and technical fixes like filtering ballast water are coming, but the creatures are already here, merrily multiplying. Join the various efforts to stamp out invasive species. Cut back blackberries, dig up spartina, wash your boat before taking it from one body of water to another, don’t dump that pet fish your kid is tired of into the lake. And, get over the idea that invasives aren’t good to eat.

If we eat them instead of the natives, the native species can recover. If every man, woman and child on Whidbey picked a gallon of blackberries each August and ate several pies (Twist my arm!) the next generation might look at old photos of the island and ask “What are those sticker bush berms along the highway?”

Same with the other purple invader. When digging clams, take the purple ones along with the little necks and butters. Or better yet, this season eat only the purples, plant the natives back in the sand with their little butt cheeks down, (take a look, you’ll see what I mean). Fill in the hole.

On Maui, top chefs took part in the “Invasive Species Cook-Off,” serving a fish that threatens coral reefs. Whidbey needs an annual “Eat the Invaders” bash. Local restaurants could serve Green Crab Bisque, Zebra Mussels Mariniere and Purple Clam Chowder. We could have a cook off, entrants devise recipes for non-natives, cook them up for judges and win fabulous prizes. Like trips to the homeland of their ingredients.

So here I am all ready to cook up another batch of PVCs (unfortunate acronym – plastic pipe?) but we only uncovered four of edible size. That’s not because they weren’t out there, the tide wasn’t low enough. My non-scientific observation is that they prefer either less rocky locations or deeper water. We’d have found plenty if the tide had gone down a few more feet. 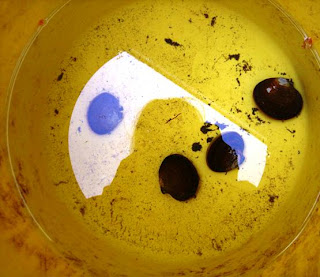 Self portrait with Purple Varnish Clams.

Always check for beach closures and PSP warnings before digging. In Washington call the Department of Fish and Wildlife Shellfish Hotline – 1-800-562-5632

From the amount I’m writing about them, you’d think I was the clam maniac.

(A slightly different version of this post appeared in the South Whidbey Record.)