For my last creative act on Whidbey, I have created an art reef. It was part moving task, part tribute and a large part sleep deprived craziness. 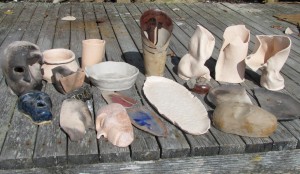 The materials for the reef were some ceramic pieces my son Jeremy did in high school and college. Some were never given glaze and a final firing. A couple were broken, and some were fanciful faces. He didn’t want me to bring them across the country to him and I’d already stored all the pieces I could. I couldn’t just throw these away. So I decided to use them to build habitat. Clay, inert and rocklike, is a better reef building material than tires, or subway cars.

The Art Reef and the Eelgrass

Jer was the one who originally called my attention to the loss of the eelgrass in Holmes Harbor. That was the event that started the Beach Watchers underwater mapping project, my column for the Record and this blog. So in tribute, yesterday I loaded his left over ceramic work on one of Tom’s windsurfers, paddled out to the lush eelgrass meadow that has returned here and dropped the pieces in a bare spot to form the art reef. 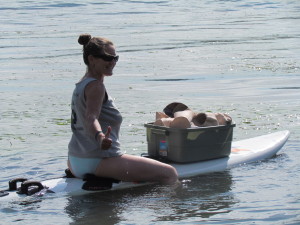 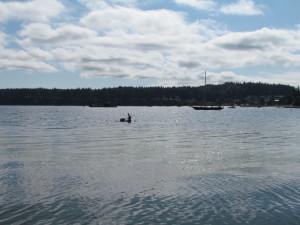 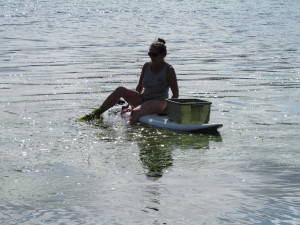 Ideas About the Art Reef

The craziness part had nothing to do with getting wet in chilly Puget Sound. Here on Holmes Harbor the water is quite warm after a few sunny summer days. It felt great. The insanity was what went through my mind as I was doing this, imaginative scenarios in which small fishes swim in and out of the mouths and eye sockets of some of these faces, and scuba divers of the future discovering this trove. As many of the pieces were made with local clay and sawdust fired with no glaze, they’ll probably be mistaken for the work of indigenous peoples and cause a minor stir in the underwater archaeology world, due to their unusual slumping forms. And the faces may lead to new theories about belief systems.

The Future of the Art Reef

At the very least, on trips back home, the kids can dive down and check out the art reef in situ. I hope next summer someone will go down and find the reef and take some pictures of it in action. And if, by mistake I put anything down there that Jer actually wanted, he can recover it. Sunken treasure.