In the true spirit of Independence and the preemptive strike, South Whidbey’s patriots ignore the calendar and shoots off their fireworks on July 3rd. They do it right outside my back door.

Here’s a picture I took of the festivities a couple of years ago. 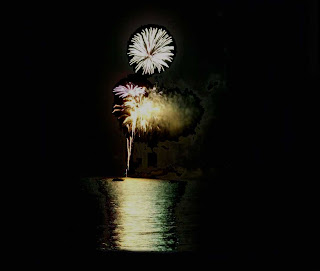 And here’s a shot of the preparations for this year’s bash. 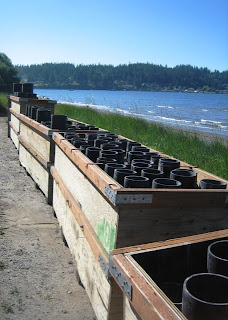 Ten of these crates full of sand and giant shell casings were arrayed along the shore yesterday. Today they’re being loaded aboard a landing craft that will be moored out in the harbor tonight as the platform for the show.

This afternoon crowds will descend on the partk across the harbor to hear patriotic songs and get sticky with cotton candy and sugared drinks. Up and down the shore families are hosting barbecues and swanky parties.

At our house the doors are open to whomever wants to come by, and after sundown a motley assortment of friends will show up with their BYOBs and drape themselves over our beach deck.

Let the oohs and aahs begin!

Tomorrow, and the rest of the weekend, and the week after, cardboard and plastic junk will wash up on the beach. I’ll pick up as much as I can.

It’s the hidden junk that really concerns me. The chemical fallout from all these shells drifts down to the waters of harbor, dosing all the creatures below the surface with sulphur, manganese, copper and oher heavy metals. The prevailing winds are from the north and the shallowest portion of the harbor, including mudflats, is to the south, a situation which insures that the heaviest concentration of the toxins will end up right in the clam digging beds of the public park.

From the Shore Stewards newsletter:
“Wherever you buy them, you are probably looking at how much dazzle you can get for your money. This could include the colors the firework emits, the sparkle effect, how high it flies, whether it whistles or explodes, etc. Each of these effects is produced by a different chemical or metal, and many of these are toxic. Glittering greens are made by using barium nitrate, and blazing reds use lithium or strontium compounds. Brilliant whites result from use of aluminum, and blues are created by using copper compounds. Other ingredients may include nitric oxide, potassium nitrate, sulphur dioxide, nitrogen dioxide, antimony, sulfide, and perchlorates. Unlike most other consumer products that are regulated by our government agencies, the ingredients of your typical firework are not listed on the package. Fireworks are generally produced in China, and those that are bought “illegally” on Reservations have little regulation as to what ingredients they contain. And there aren’t many of us who ask the operator of the stand what chemicals are in their fireworks.”

This is killjoy stuff. What kid hasn’t looked up at the sparkling night sky and dreamed of being that romantic character, the pyrotechnician? I know I’ve thought about it myself, even as an adult, after meeting a woman who was learning the craft. And I’ve seen some absolutely stunning shows. One on Lake Union in Seattle was choreographed to music, like Bellagio’s fountains.

There’s hope for a less toxic 4th in the future. Also from the Shorestewards article:
Scientists around the world are now looking into more environmentally-friendly alternatives to the traditional chemicals and metals used in fireworks, and are reformulating how they are used. One way in which they seek to reduce the use of perchlorates is to get that energy to propel the firework skywards from a higher nitrogen content in the formulation. By using less perchlorate, you produce less smoke, which also means less need for heavy metal coloring agents: barium, copper and strontium, to name a few. Use of nitrocellulose is another alternative to perchlorates. According to Darren Naud of DMD Systems, “Nitrocellulose is probably one of the
best low-smoke ingredients. It burns with little smoke, and there’s no fallout or residual combustion by-products that are nasty. There’s just [carbon dioxide], water and nitrogen.””

(Nitrogen is actually a villain in the story of marine clean up, so these green works may be better but not all good.)

Happy Independence Day. Keep those fingers intact and a hose within reach, it’s really dry out there.