How Many Firsts Can We Rack Up In One Day?

Once out of York Harbor and at sea we began a day full of firsts. For the first time the decision of where to head and where to bed down for the night was all ours. We had several options in mind, but over the next couple of hours, eliminated most of them, Goldilocks style.

We were hoping to anchor, so tiny Perkins Cove, at Ogunquit, which came highly recommended as a beautiful place to visit, was out. I called the harbormaster at Wells, the next port to the north, and learned that they had a few moorings left, but none that were deep enough for Sunshine. Anchoring? No.

Kennebunkport we didn’t even consider. We’d heard it’s become quite expensive, what with the Bushes nearby and all. So we decided to go on to Cape Porpoise, which the cruising guide called a working harbor, full of lobster boats, with room to anchor. It sounded perfect.

The seas were four or five feet and close together. We were porpoising over each, sometimes slipping sideways and rolling a bit. Tito hated every minute of it, and panted relentlessly. But when the wind picked up to 13 knots we raised the sails, the ride smoothed out and we all relaxed. Then, at Kennebunkport, Tom sailed really close to shore to get a look at what the place was like, giving me the willies. I was looking at the chart and could see that unmarked rocks dotted the beach. Then he played around outside the perimeter buoys at the Bush compound, teasing me with the threat to sail right through the security zone just to see what the guard boat would do. He’s pirate enough to make me gird my loins in case he actually did it. I’m not really all that much of a wuss, but spending time at gun-point is not on my cruising bucket list. 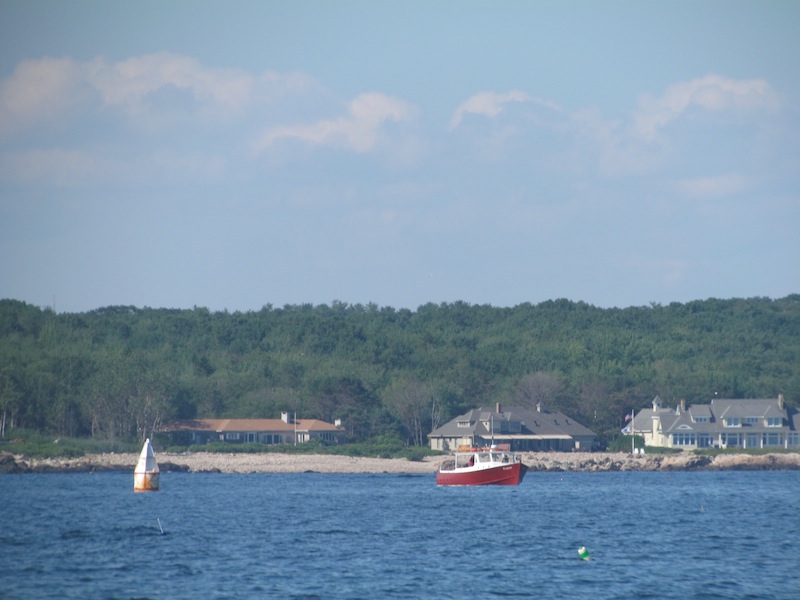 We were finally headed in toward Cape Porpoise Harbor at about 4: 00, when I executed my own hair-raising maneuver. I was at the helm and mis-identified the entrance. I had us in some pretty shallow water before I realized what I’d done, headed out again and found the correct channel. Consulting the chart later, I found the route I was taking would have got us through if the tide were just right, but not knowing that it was a scary, brain-dead moment. 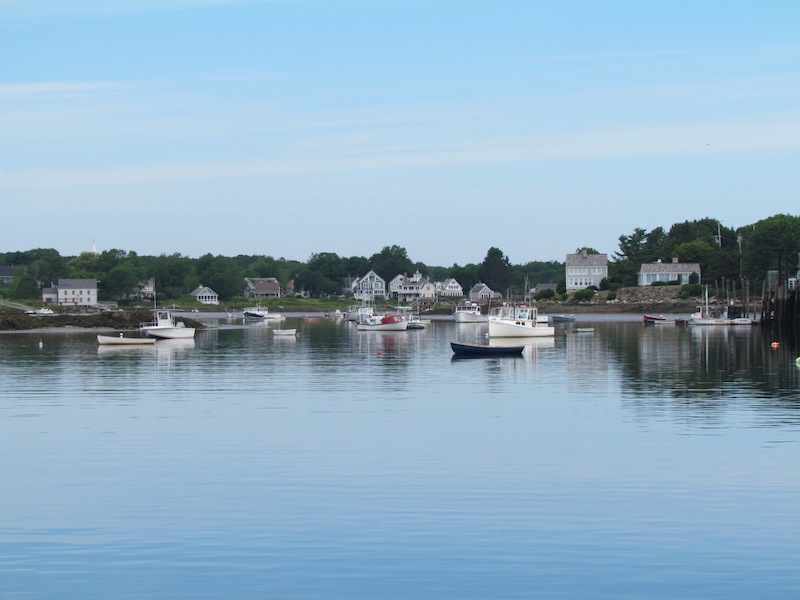 Cape Porpoise harbor was the best possible place for us newbies to drop our hook for the first time. The water was so calm we didn’t even have to try twice. Though we could hear the sea crashing on the rocks outside the harbor, inside was as placid as a backyard pool before the kids jump in. We found a spot in about ten feet of water, right between a big lobster boat and a sailboat a few feet longer than Sunshine, and Tom heaved the old CQR over. Though we’ve threatened to replace it with a fancy new Rocna or Manson Supreme, it did a fine job, unchallenged at all by wind, tide or current.

As a fitting end to a successful first day cruising on our own, we decided to splurge on a fish and chips dinner on the pier, which was conveniently placed just a few oar strokes from our stern. Squeezing in at the dinghy dock we found an assortment of lobstermen’s battered tenders. Some appeared to have been left there for years simply because they were so charmingly funky. A few barely floated under their cargo of rainwater. 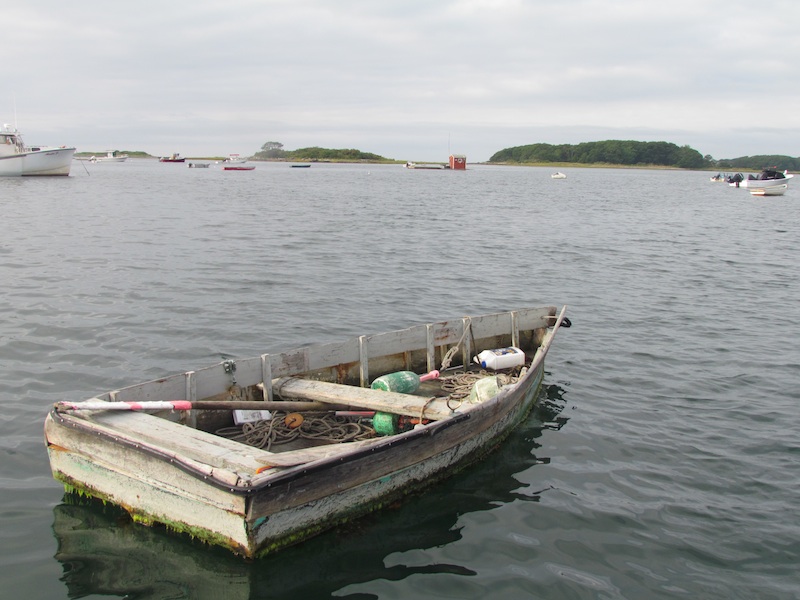 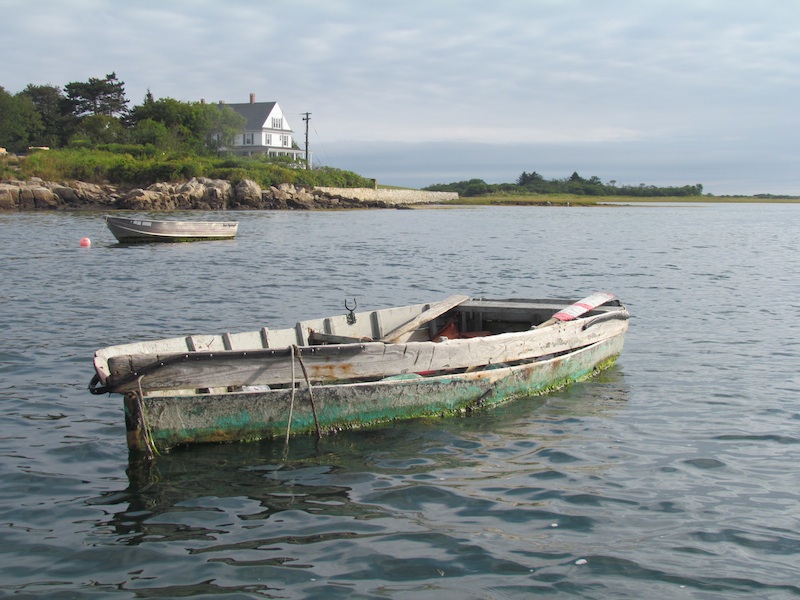 Tom took twelve pictures of this “daily driver” dinghy. He wants one of his own.

Talk about a easy intro to life on the hook. Cape Porpoise provided the perfect beginner’s anchorage, alfresco dining on the dock, and after dinner, a mile amble down a rural road past summer cottages brought us to the village of Cape Porpoise. In addition to the ice cream shop, galleries and restaurants, Cape Porpoise has a grocery store with decent prices. We got milk and a few other things and headed back to the boat for drinks and sunset pictures. By 8:30 the tide was out and mudflats and marshes surrounded us. The air was almost perfectly still and the setting sun floated the fishing boats on gold. 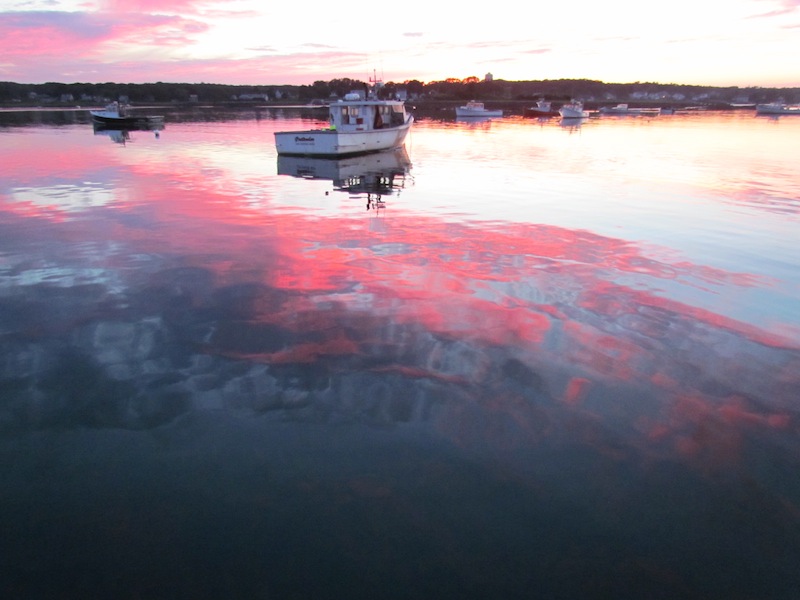 Even When the Weather Cooperates, it’s Hard to Leave a Good Anchorage

After our first night sleeping at anchor and our first morning relaxing at anchor, we couldn’t help ourselves, there were just too many good reasons to remain for another night.

The only thing that put a dent in the perfection was the abundance of mosquitoes. We’d run out the can of Cutter insect repellent I brought from Washington the first night, so had to get another before dusk or face closing all the doors and windows and hunkering down inside. I’d much rather hike back to the store and cover myself in smelly chemicals than do that.

Sailor’s superstitions say never cut hair or fingernails at sea. They are offerings to Prosperine, the Roman Goddess of the infernal regions, and Neptune will be angered by this breach of his domain. Doing so would bring bad luck

We’re not much on superstition, but that morning we tried to get Tom’s hair cut, and by the end of the process I was thinking I should pay more attention to Neptune’s wishes. It was a nasty business. When we started this living aboard thing, we decided we’d give each oth 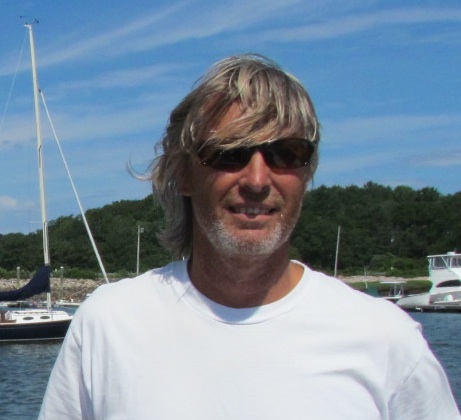 er haircuts to save money. But Tom’s a finicky customer and I’m an impatient barber.

The bargain is rather lopsided. My hair is easy to trim – just cut straight across about every 6 months – and Tom’s spent years learning how to cut hair. I on the other hand, face a technically much more difficult task, that needs

to be done more often, and I’ve steadfastly resisted learning anything from his periodic tutorials.

The whole debacle was compounded by the fact that both of us really liked his hair the way it was. But it was high maintenance. If not carefully attended to he looked a bit shady. (Good thing that worried mom from Gloucester couldn’t see him through her daughter’s phone.)

Two hours later I was steamed, his hair was shorter than he’d envisioned, and both of us wished we’d never started. But he did look more socially acceptable for the venues that care (old poops and posers) and that we occasionally have to navigate.

To decompress, we dinghied over to the nearest islands, Stage Head and Little Stage, which are connected at low tide, for one of our favorite activities – walking boulder strewn beaches. While ashore, we were intrigued to see two sailboats seemingly sailing straight onto the rocks. They managed to find a narrow passage, sail safely through, and anchor in the hole behind the island. 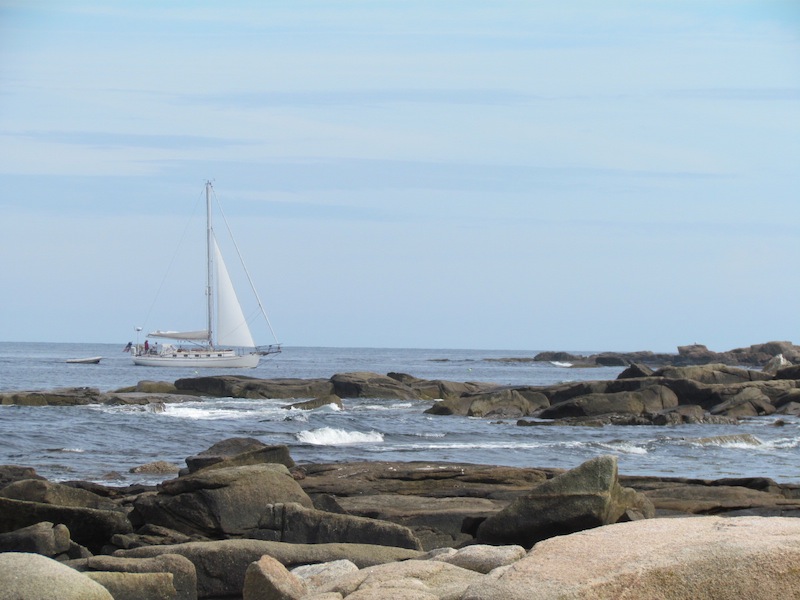 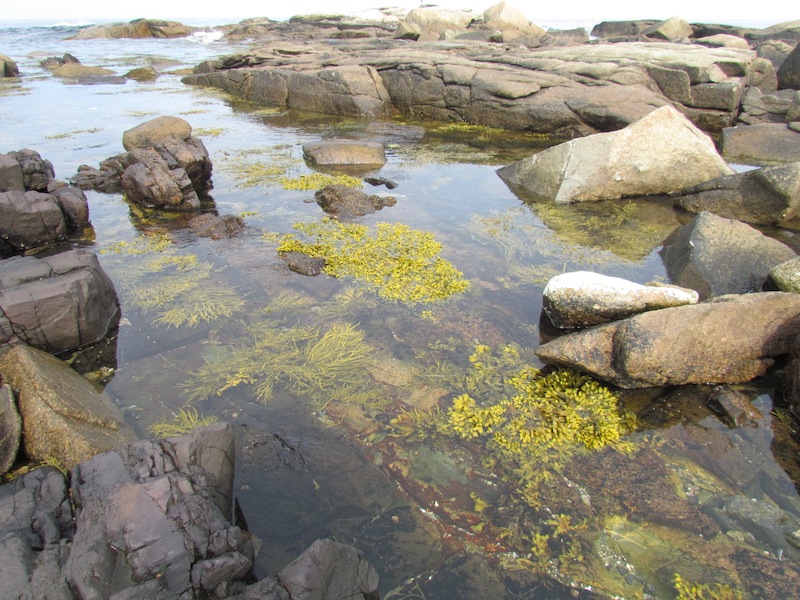 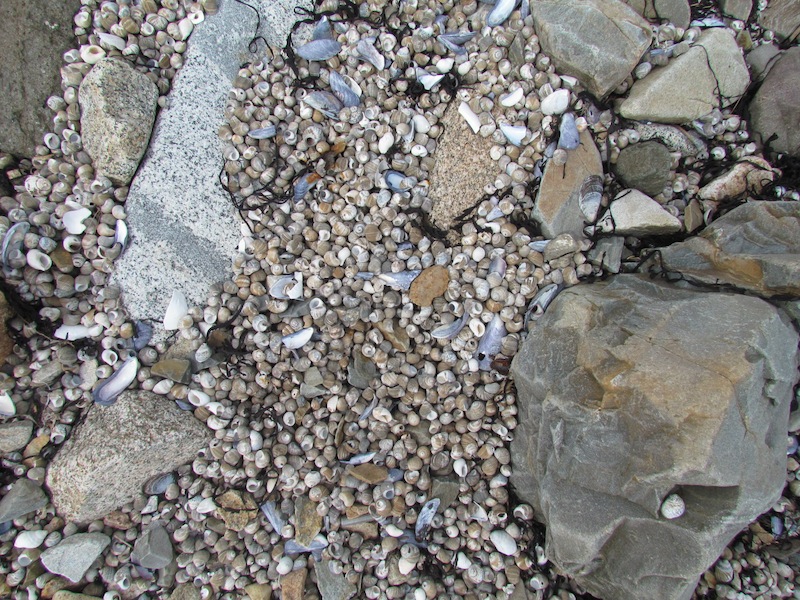 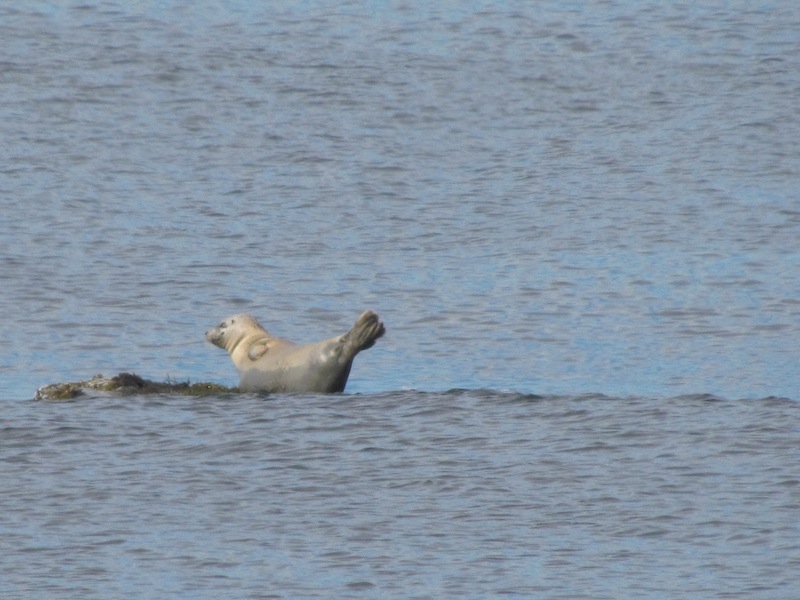 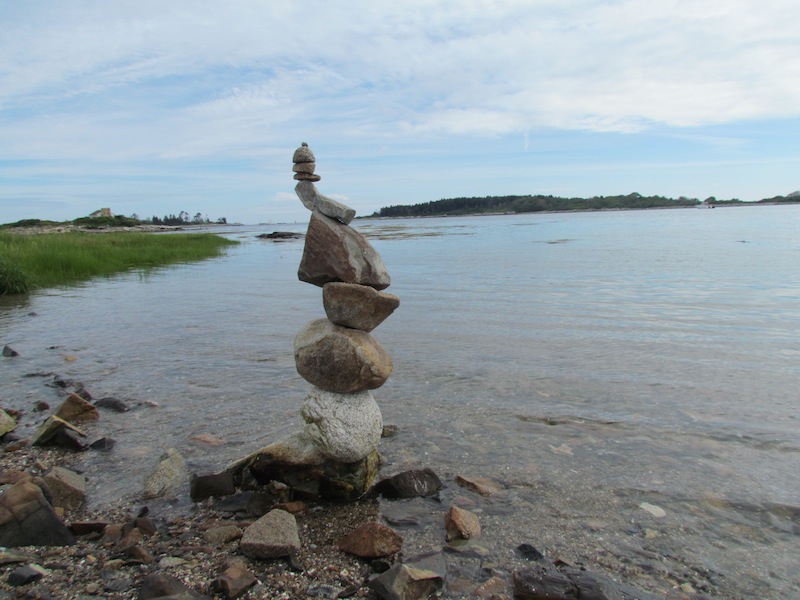 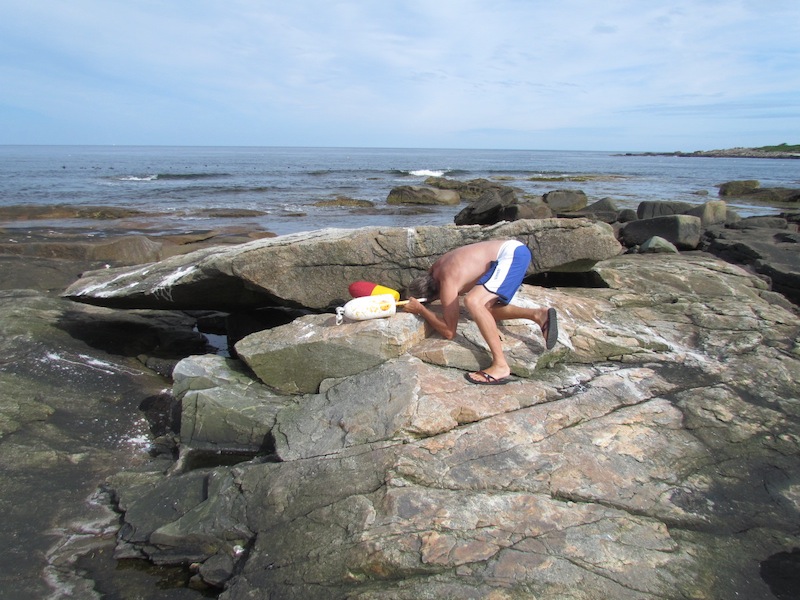 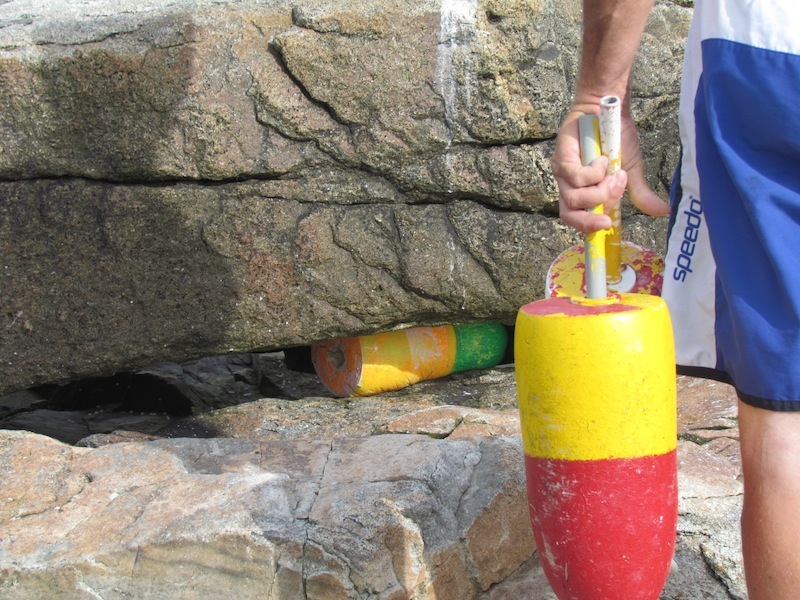 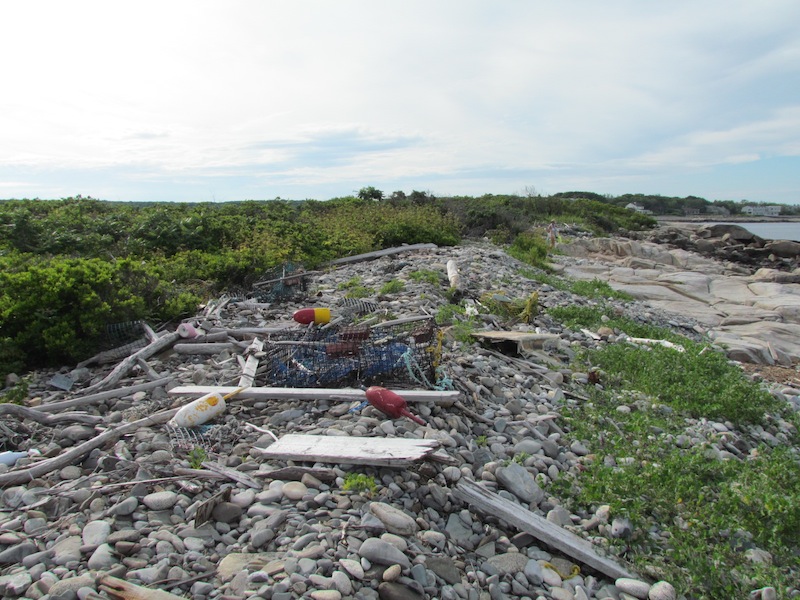 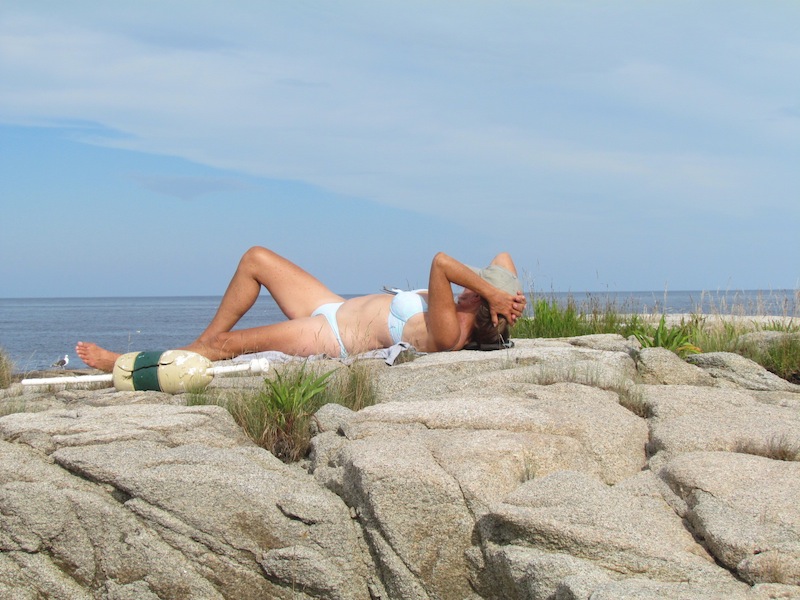 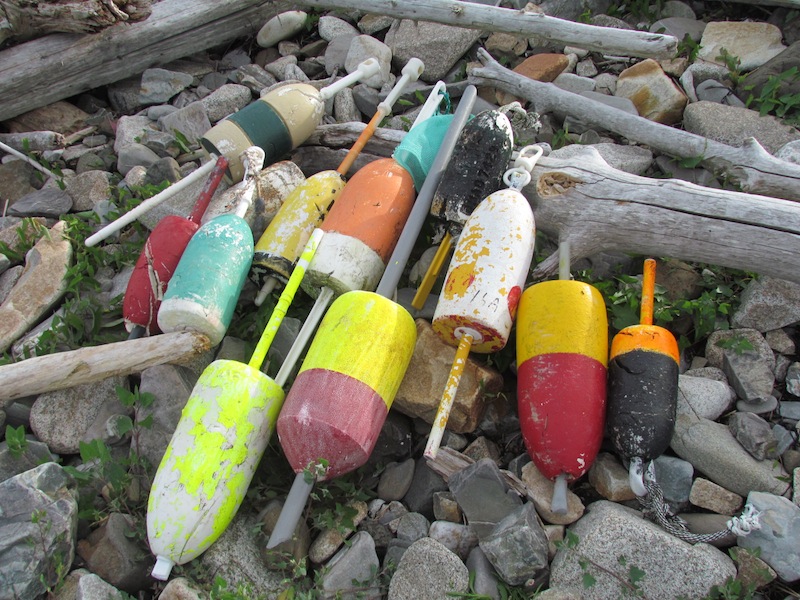 After walking around the whole island taking pictures, watching seals, laying around on rocks and picking up a dozen different colored lobster floats, we came back to find the dinghy high and dry and the bay basically emptied out. The dinghy wheels worked well on the packed sand and Tom pushed the little boat to the water easily enough. But when we started off we found there wasn’t enough water to run the engine.

A couple of guys came wading across the inlet towing a canoe. Waves were breaking on their ankles. They advised us that we’d have to get out and walk across most of the bay. After walking over the first bar the water deepened, so we got in and started the engine. A couple of seconds later I had to tell Tom to bring it up again as the water was getting shallow once more. We actually hit sand in the seconds it took him to stop it. While he fooled with the engine I held us in place, then towed dink and Tom across the shallows and down the channel between two more islands. I kept thinking it would deepen enough for me to jump aboard, or shoal enough that Tom would have to get out but neither happened. He just sat there enjoying the ride while the depth went up and down from below my knees to mid-thigh all the way back to the Cape Porpoise channel. When Tom could finally drop the engine, I swung my now boneless legs aboard and we motored the last hundred yards to Sunshine.

The exercise was good for me but I was pooped, so after hors d’oeuvres of smoked oysters, pickled green beans, cheese and olives with a glass of wine, I was ready for bed. The air was moist and we had to bring everything in. Fog settled in overnight. I got up once for my first of many checks of how the anchor was holding and was charmed to find the bay sparkling with phosphorescence.

During that time at Cape Porpoise we thought a lot about what we were doing, all the firsts we’d just experienced and what lay ahead. We now have a theme for our cruising life: