Once each year, volunteers deploy onto thirty-five Island County beaches for the annual Intertidal Monitoring. Yesterday was the day for the beach I help on.

The monitoring program is 14 years old. It originally sprang from concerns publicized after the Exxon Valdez oil spill.

Before I go on, I have to say that instituting the innocuous term “spill” to describe 11 million gallons of black, penetrating goo bursting forth and covering 1,300 miles of coastline was a masterful PR stroke. Makes it sound about as bad as little Timmy tipping over his milk at dinner.

Anyway, valuing the damage caused by that event proved difficult because no inventory of what had previously been living on the beaches was available.

Since Island County lies in the center of Puget Sound where ships, including oil tankers, are a fact of life, a large spill is always a possibility. The goal of intertidal monitoring is to provide a set of baseline data should it ever be needed for damage assessment or any other purpose. 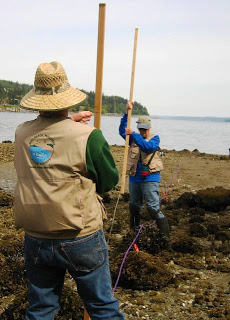 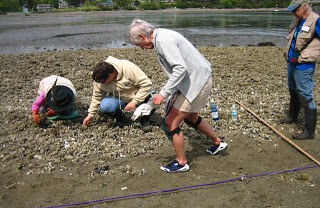 Data collected include physical characteristics of the beach, a list of species found, and count of numbers of species in a set of 2×2 quadrats. 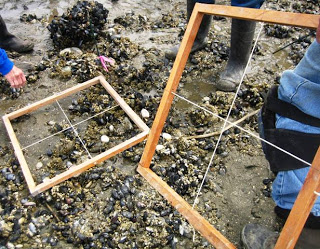 Here are some of the creatures we came across yesterday. 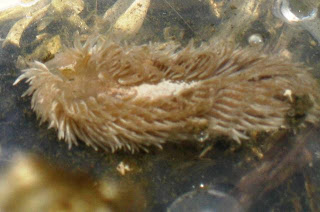 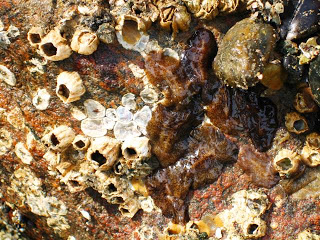 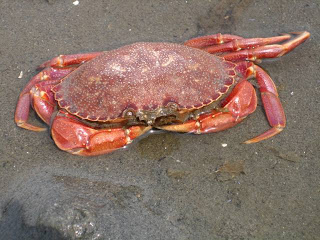 Molt of a juvenile Dungeness crab 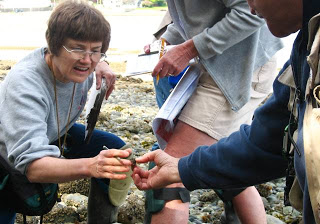 When in doubt consult the on-site expert

While I don’t have access to the full data set, I do have some anecdotal evidence to share. And at least one photo to back up my claim.

Yesterday, for the first time, we found two large oysters on our beach. This was most intriguing, as oysters do not typically grow in this area. There were no small oysters to be seen so we had to assume that these were somehow planted. Homeowners in the vicinity have tried growing oysters with little success. The oysters live, but the don’t reproduce. As this beach is part of a park and not close to homes it seems an odd place for someone to plant oysters, but you never know. The change was duly noted. 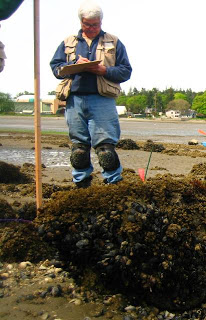 Island County Intertidal Monitoring Host, you’re one of a kind.

The other anecdote relates to invasive species. Purple varnish clams, a non-native species, first visited this beach several years ago. Now they’ve take up residence and their numbers appear to increase each year. This handful, enough for a good size serving of Linguine with White Clam Sauce, came out of one small hole. 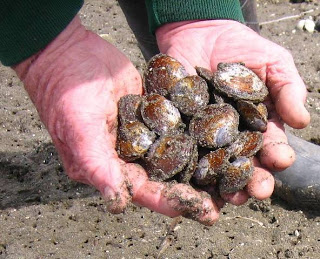 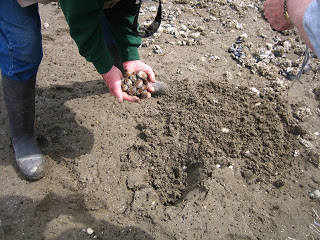 Any trip to the beach includes a boatload of gear, and scientific expeditions are no exception. This group brought along a lot of stuff that could potentially become marine debris. Note the kneeling pad, the rubber boots, the gloves and hats. And and in the background are survey equipment, PLASTIC water bottles (what were they thinking?) and a backpack. Happily, none of these were left behind. I checked. It was Mother’s Day, I just couldn’t stop myself. 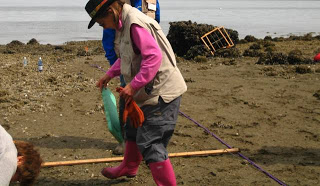