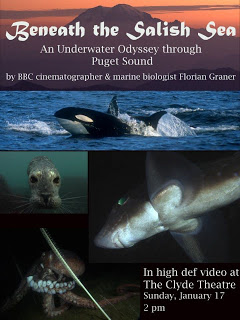 Diver, cinematographer, and marine biologist Florian Graner knows well what lays beneath the surface of the Salish Sea.

Florian lives on Holmes Harbor, and dives regularly from the beach off of his Whidbey Island neighborhood. He also dives and films in many other parts of the world, and has worked on films such as The Blue Planet.

His film, Beneath the Salish Sea opens with the amazing variety of life just off Beverly Beach and then broadens its focus to include other areas of Puget Sound.

Florian, who works with Susie Richards and Chris Burt at Service Education Adventure (SEA), wants people on South Whidbey to know just how rich the ecosystems are right here in our home waters, so they will be inspired to protect them.

His footage of that ecosystem is suitably awesome.

Graner’s Sealife Productions produced Beneath the Salish Sea, the special Secrets in the Sound for KIRO TV, and most recently, a film about Olympic National Park for National Geographic.