I’m a serious football fan, around the time of playoffs and the Superbowl. I’m especially serious when my hometown team, the Seattle Seahawks, are playing in either.

Though we’ve been nowhere near Seattle this football season, we’ve managed to watch the important games, all two of them so far. Tonight will be the third.

In Portsmouth, Virginia we hunkered down in a sports bar to wait out a tornado warning – talking of serious, that’s some serious rain. It just happened to be at Roger Brown’s, and the Patriots just happened to be playing the Broncos for a spot at the Superbowl. Truth be told, at that point I didn’t even know the playoffs were happening, and had no idea the Seahawks were involved.

Then, while waiting out some high winds in Belhaven, North Carolina, we headed up to The Shack and watched the Seahawks squeak by the 49ers. Throughout the evening, a couple of guys at the next table kept shouting “Go Eagles!”

Now in Beaufort, North Carolina, where we’ve been waiting out a week of arctic weather, we’ve become known as the people from Seattle. So we’re planning to head in to the Backstreet Pub where it’s standing room only even when the bar is empty, and enjoy being the only ones in the place with a home town team to root for. The locals do have a hometown favorite though in Seahawks Quarterback Russel Wilson who played for North Carolina State.

How to Identify a Seahawk

The “go eagles” cheer was just a joke, but here and there around the east coast we’ve been asked, “what’s a seahawk?” Folks seem confused because the northwest is known for the bald eagle, which eats fish, but is not a hawk, and the red tailed hawk which is a hawk, but doesn’t catch fish.

Confusing things further is Taima, the live hawk (as opposed to mascot hawk) that appears at Seahawks games. That’s an Augur Hawk or Buteo Hawk. A mountain and steppe species. Once again, not a sea hawk.

The Seahawks are actually named for the Osprey, a well known, and wide spread, fish eating raptor. There are lots of osprey in the Seattle area, but we’ve seen them in Boston, along the the ICW in the Great Dismal Swamp and here in North Carolina. Here’s one that sat on the wind indicator of a nearby sailboat in Quincy, Massachusetts. 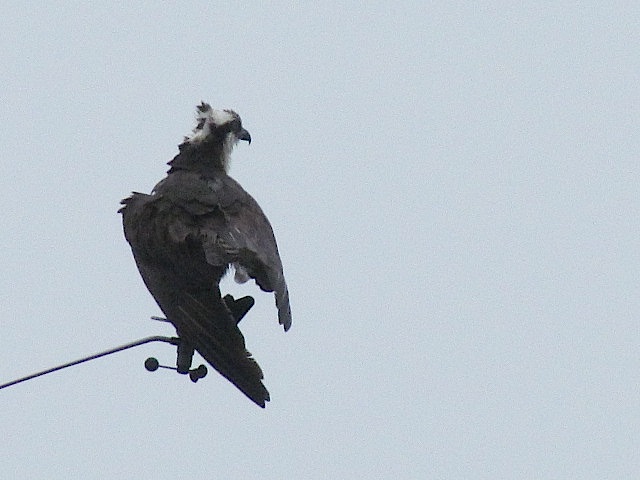 From the Seahawks FAQ, Here’s how the team got the name Seahawks

Q:How did the team get the name Seahawks?

A: In June of 1975 a contest was held to name the team. After receiving more than 20,000 entries the name Seahawks was chosen.

Q: What is a Seahawk?

A: Seahawk is another name for an osprey. Ospreys are birds that live on rivers and sea coasts all over the world. They have a wing span of 4 to 6 feet, and body length of 22″ to 25″. Seahawks soar over the water to hunt for fish, and unlike eagles, ospreys often dive completely under water, using powerful talons to grab their prey.

And here’s a link to an explanation of the development of the Seahawks logo.

Hoping this is how the Seahawk receivers will look to the Broncos tonight – they’ll only see the back of them, flying across the goal line. 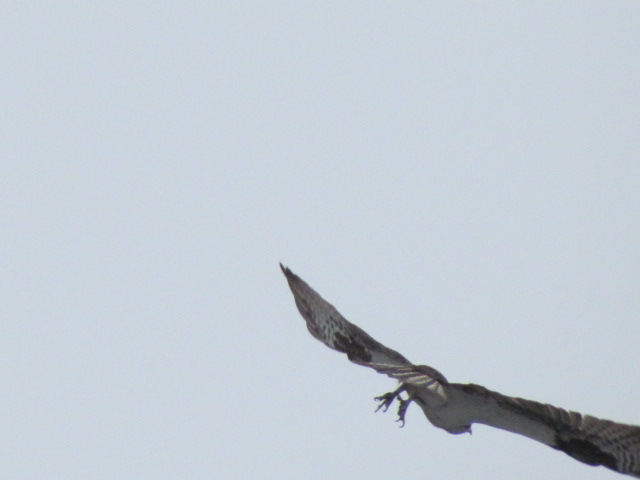