I accompanied my friend Candace on her monthly dead bird hunt.

A member of COASST, the Coastal Observation and Seabird Survey Team, Candace tracks a mile of Puget Sound shore for avian remains.

Lucky for the bird population non of our beach finds included feathered bodies. Here’s what we found instead. 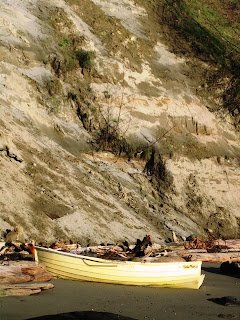 This charming yellow sailboat was pulled up to the toe of the bluff as if the sailor had just left it for a moment to climb up and take care of some land based business. 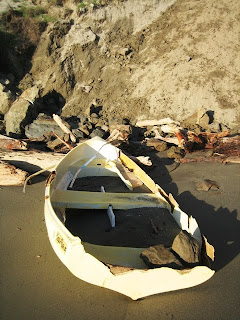 Getting a little closer we found that the sailor had placed some pretty weighty objects in the bilge, so obviously planned to leave the boat there for a while.

Next we came upon a totem pole. 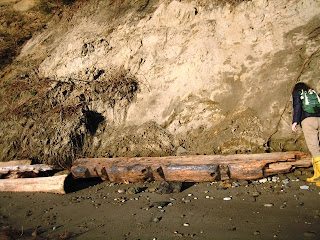 We were unable to determine what animals it was meant to depict, but clearly something with nostrils and a belly button. Perhaps one of the ballet hippos from Disney’s Fantasia? 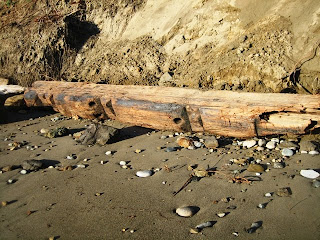 Then we found the concrete stairs and stopped for a think … did these wash up or slide down? 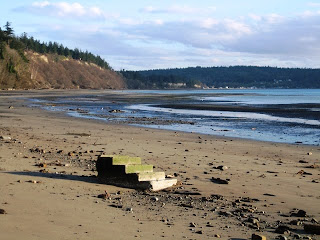 Bones. These got us excited for a moment with visions of startling the scientists with remains of an off course pelican, albatross or, from the size of them, ostrich. Nope, deer. 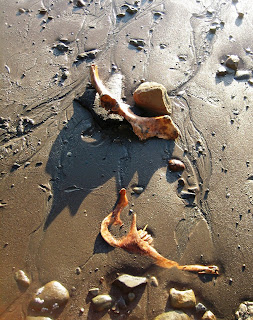 I love the beach.