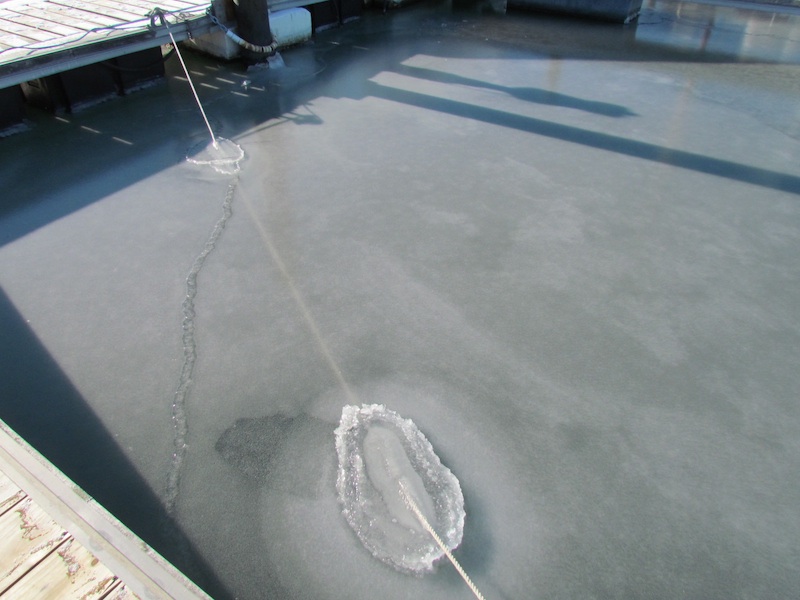 The Plan Was to Live Aboard – Quite a Bit Farther South

Last fall, as we were getting Sunshine ready to launch, our friends and acquaintances at Hingham Shipyard were pulling and winterizing their boats. All of them repeatedly warned about the horrible Boston winter ahead. They asked us what Whidbey Island winters were like, did we get much snow. When we said temps in the 40s, rain rather than snow, they laughed and said we’d better either put her in the water fast and get out of here or just leave her on the hard and rent an apartment. No one had our faith that we’d get south before ice closed our path.

None of those friends was a liveaboard. They were all summer sailors. Some, like Kirk who only sails to race, thought we were crazy to even contemplate living on a boat in any weather. Others, like Peter, had done some short term cruising and said they’d like to be able to do what we’re doing. Our friends Stacey and Jesse plan to live aboard Smitty eventually, but even they shuddered at the idea of putting the boat in the water in the winter.

So when technical difficulties forced us to stay here and rent a slip for the winter, we faced the prospect with dread. The first few days were rough. Not only were we going through the adjustment of changing long held expectations and plans, we had no winter systems in place and scrambled to get a heater, insulation and snow removal tools. The heater and insulation have saved us. So far we haven’t needed the snow shovel. But mostly we worried about that ice. We’ve heard it can close rivers and entire harbors. We’ve heard it can break boats. So far, it’s just been interesting to watch come and go.

Snow, we’ve learned, is the trigger for the ice. Falling on the cold water it seems to form a matrix, trapping air on the surface. In the morning sometimes it’s just a thin coating and a ripple can break it. Other times it’s like an inch thick layer of gelatin that undulates with the waves. Only a few mornings has it been thick enough and stretched far enough so that the whole calm river has begun to ice over.

We’ve learned to appreciate a nice strong wind that keeps the water active so it won’t freeze. Though we also enjoy the quiet times when the wind quits, we just get a little more nervous about ice. The big cruiser across from us has its bubbler going and so far that’s kept Sunshine’s hull free of ice. If it gets really cold we’ll rent one of our own. 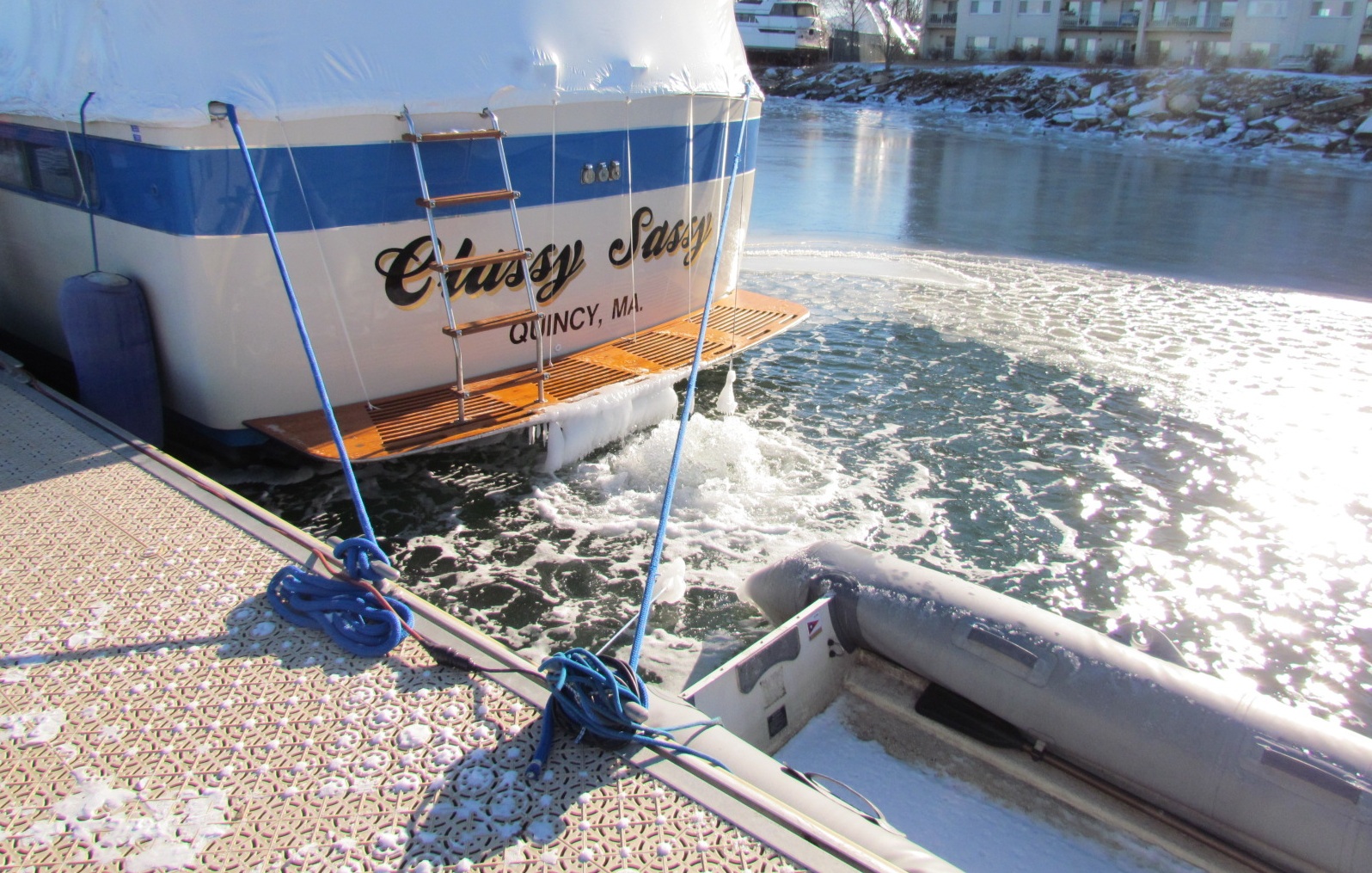 The locals say the cold weather came late this year. Last winter they didn’t get much ice at all, but this year appears to be colder, or at least to have more cold snaps. But every few days the temperature rises again into the 40’s, once even to 61, and the ice and snow disappear and we breathe a sigh of relief thinking maybe the ice won’t get us after all. 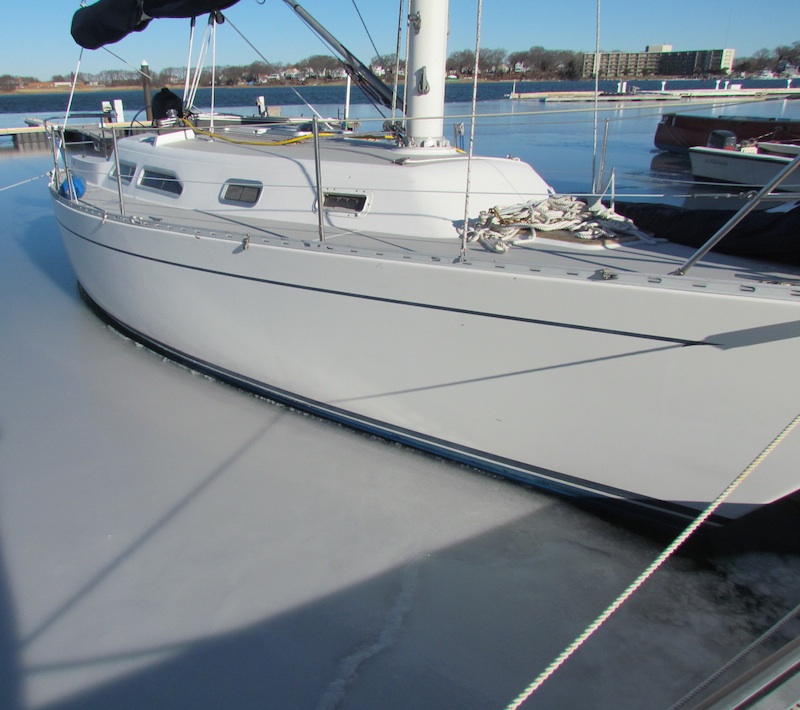 How we’re coping in this new, snowy environment

I enjoy snow and always wanted more of it back home in the Seattle area. While it’s fresh it slows things, quiets things. But here they’re good at clearing the streets, so the cars get going quickly and everyone gets to work and school like normal, unlike in Seattle, where snow brings everything to a skidding, fender crumpling halt.

The weather forecast one day warned of minus 15 windchill and hypothermia. Leaving gloves off was not an option. My hands started to hurt after just a couple of minutes exposed to air. Every store has displays of gloves, hats and balaclavas. That’s an item you don’t see in Seattle. Only extreme skiers and bank robbers have them. But just walking the 100 yards down the dock that day I want one to keep my chin from freezing.

We can walk to almost everything we need to do, I’ve even walked to the laundromat. At Costco I found traction thingies that attach to your shoes surprisingly cheap, but was suspicious of the quality. But once again, snow here is easier to walk in and drive in. In Seattle it’s like grease. Let 1/4 inch of it accumulate on the road and every other car will end up in the ditch. Every time you set foot outside you risk upending. For fun, kids take a few quick steps and then slide for ten feet. But here, even on the slickest patches, we’ve done fine by modifying our walk to strike the ground with a flat foot instead of with our heel.

While it’s true we’ve seen more snow and more ice than ever before in our lives, so far we haven’t seen anything to suggest living aboard in winter in the Boston area is a bad idea. If you like the outdoors, it’s just another winter sport.

These Opinions May All Change Tomorrow

Friday the weather folks tell us, we’re going to have a blizzard. The jet stream is bringing 1 to 2 feet of snow blowing in tomorrow afternoon and night on some nice strong winds. They’ve also mentioned that we’re likely to get something called Thundersnow. From the description I read on Wikipedia, I think that will top Seattle’s Snowpocalypse 2008.

This will be my first real blizzard and I’m actually looking forward to it. Not without some trepidation … I likely won’t sleep at all tomorrow night.

We’ve been planning for a couple of days. Just call us Blizzard Doom Preppers. How will we get the companionway open with two feet of snow on top? Can we rig up a cover of some kind? That lack of a dodger may bring us to grief after all. At this point we think we’ll we have to open the hatch every fifteen minutes to brush the snow away. We’ve got a garbage bag ready to hold under the slot as we ease it back, in order not to screw up our endryment karma. Should we keep the snow shovel and brooms inside? Yes, rather than have to dig barehanded through a drift to get them out of the cockpit locker.

The other issue will be fresh air. We’ll likely have to leave the port in the head open a crack, since a drift of snow won’t harm the plastic surfaces. Might be hard on our backsides though.

We’ll also be out in the night checking that the boats near us are doing well. We’ll put that snow shovel to work finally. No one will sink under a load of snow if we can help it. Then there’s the question of how that much snow affects the ice production. We’ll just have to wait and see. 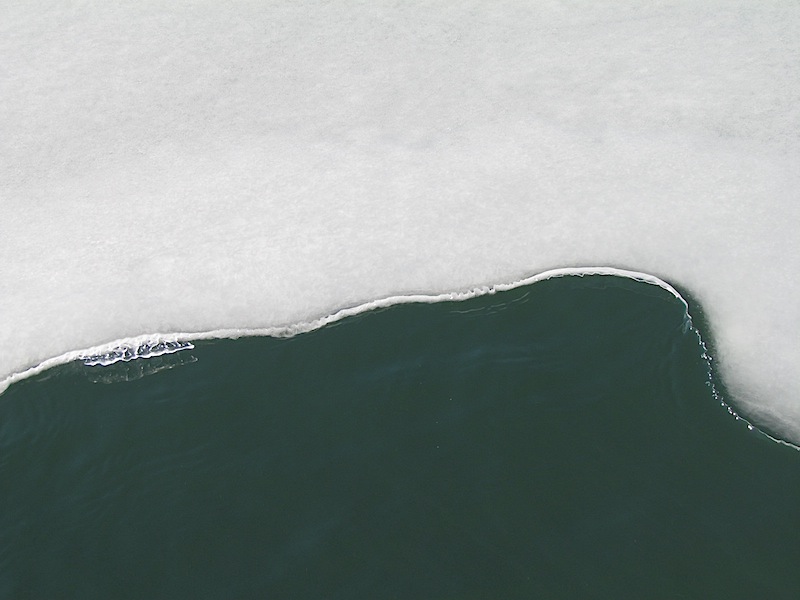 Today we stocked up on food, water and spirits to keep our spirits up. Then we swung the boat around, pointing her bow bravely into the coming “hurricane force” winds. That should help cut down on bucking and thrashing. In the morning we’ll double check lines and covers and fenders. We feel about as prepared as a couple of newbie winter liveaboards can hope to be. Prepared and informed, but refusing to panic as the newscasters think we should.

Ask me Monday whether I still like living aboard, in the winter, in Boston.

2 thoughts on “Ice and Snow and Wind: Further Lessons in Living Aboard in Winter in Boston”