Five Steps Toward A Dry Cabin 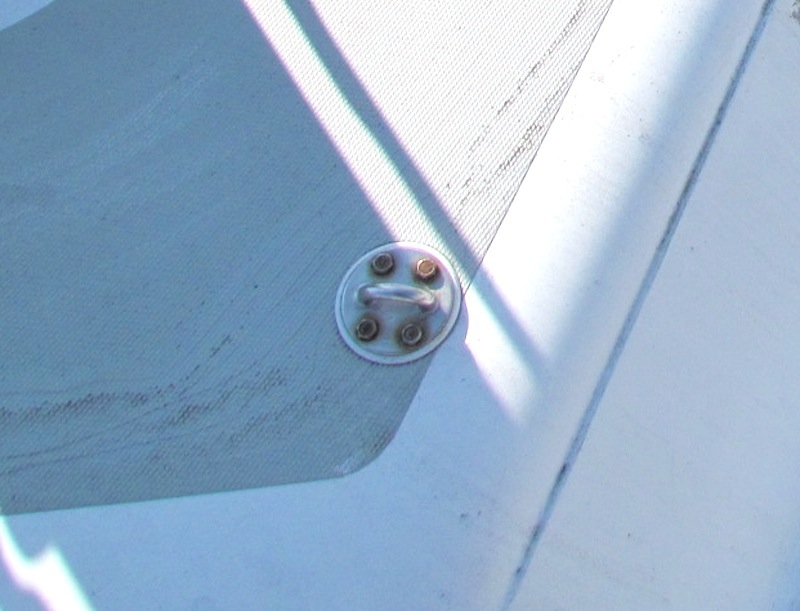 One of Sunshine’s less appealing characteristics was her deck hardware – or rather, the installation of her deck hardware. Whoever worked on her, whether the Previous Owner, or someone the PO hired, was not very skilled with tools. He or she also had a rather cavalier attitude toward proper fasteners and proper fit. Screws were mismatched, often made of the wrong material and put in a random angles so that they looked like teeth that needed braces, fiberglass edges were cracked, caulk was unbearably ugly. Surprise! Each piece of hardware leaked. 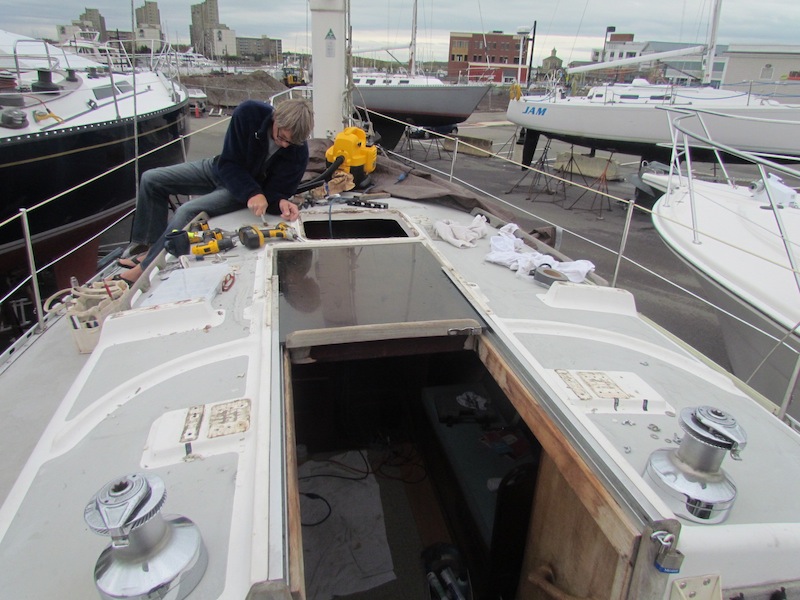 She leaked particularly well during the storm that hit Hingham while Hurricane Sandy was sacking New Jersey. Afterward, I went off to the laundromat to dry quilts and cushion covers and returned to find Tom had stripped all the hardware off the deck. This involved the traveler, line organizers, line stoppers and various sheaves and eyes. Though this one day was dry, rain was forecast for the rest of the week and the entire cabin top was now full of holes. I was, um, dismayed. I thought we’d be working on the electric system and living with the small leaks until after we launched. But it is what it is. After I took a long walk to decompress we set to work cleaning the holes, ready to re-deploy the tarp at a moment’s notice.

The decks of Freedom Yachts were built using sandwich construction, meaning they laid a layer of fiberglass, then a core layer of balsa wood, then another layer of fiberglass. It’s a common way to create a strong, lightweight deck with some insulating qualities. Balsa is good for this as it’s very light and resists compression better than foam, another common core material. The balsa is end cut to minimize wicking of water. Still, it is wood, and if water makes it through the various barriers it can do some damage. Such was the case for Sunshine. Over the years caulk had broken down, some parts had been poorly installed or the wrong fasteners had been used and then corroded. The balsa wood core at each piece of hardware had to be repaired.

Prepping the Deck for New Hardware 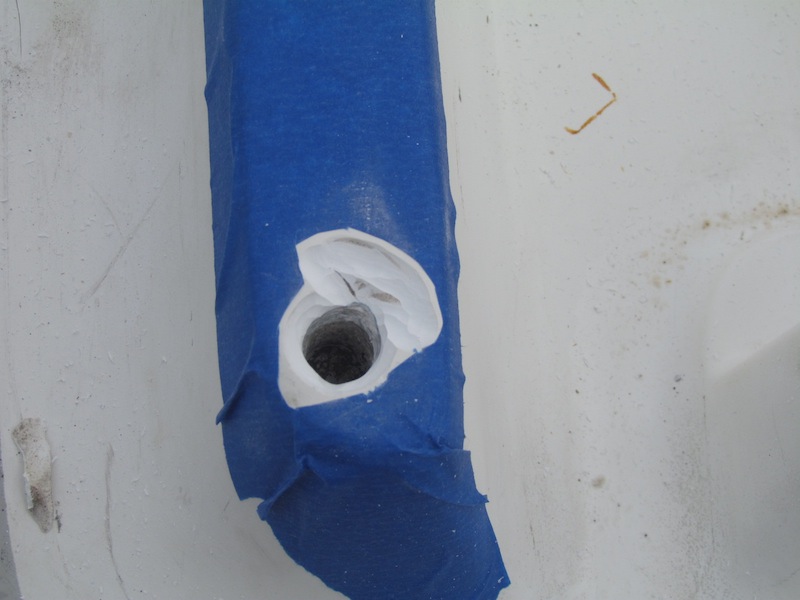 I scraped away old caulk and dirt, Tom ground away broken fiberglass edges. He did a fair bit of ranting about people who can’t be bothered to do things right and how important the correct fasteners are aboard a boat. We dried out the wood inside the holes as best we could. Then he sharpened an Allen wrench to use as a knife and reamed out any damaged wood. Inside the cabin, I did my impression of the little dutch boy, covering holes with my finger while Tom, on deck, sucked water and debris out of them with the wet vac. Last, I cleaned each hole with fiberglass solvent to get rid of all traces of old caulk. This left us with about 30 circular voids, an inch and a half across, between the layers of fiberglass, each of which had to be filled with epoxy.

Repairing the Holes with Epoxy 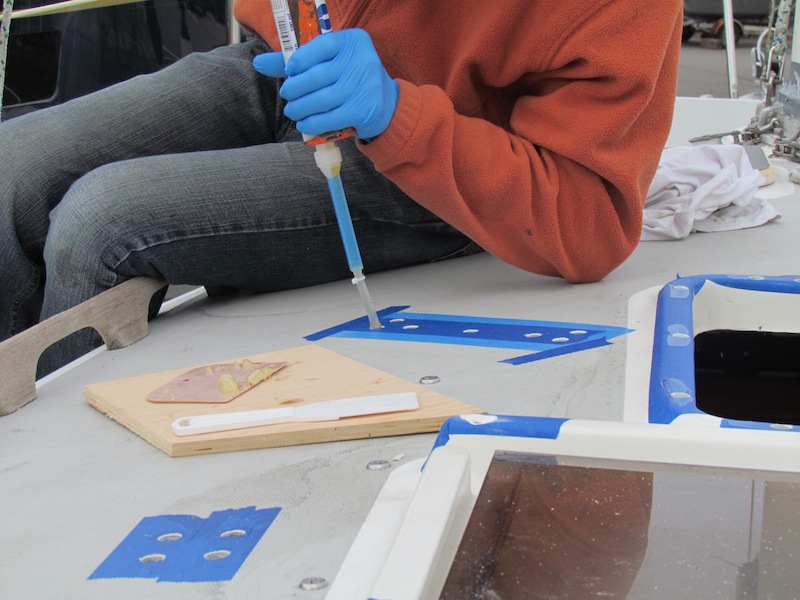 As soon as Tom started squirting epoxy into holes he knew there wasn’t going to be enough, so I chased around after another tube of West System Six10 and more blue tape for masking the rest of the holes. I had to make several runs to the marine supply stores. He ended up using four tubes rather than the two he imagined would be enough. He also sculpted new edges on a couple of holes that had been badly chipped. By the time he was done and the epoxy was curing I’d changed my tune. I’m very glad we did this job now. What a fabulous feeling to know that all the leaks are a thing of the past.

In Search of the Right Fasteners

Sourcing fasteners has been one of the hardest parts of our sailboat restoration project. Not just for the deck hardware but for everything. We’re new in the Boston area and don’t have resources at our fingertips. If we’d been doing this project in Seattle Tom would have had little problem with this – the answer to every fastener question is Tacoma Screw. He’s dealt with them for years, they have everything. He assumed there would be a similar fastener vendor in the Boston area, but as he asked around and did Google searches he found that All-Stainless, the big vendor of stainless screws and bolts had gone out of business. Lowe’s and Home Depot – sorry, I’m not providing any links to those doofusses – have killed off all the decent hardware suppliers and lumber yards in the area. (This isn’t the right place for the rant about how much we hate Lowe’s.) He finally found an online supplier called Bolt Depot that’s located just down the road and after a few false starts was able to work with them to get most of what he needed. Curry Hardware has also often come through for us.

Over the next few days Tom drilled new holes through the new epoxy a few at a time, and re-installed the hardware. First were the ones at the forward edge of the cabin, a padeye and a hinged fairlead that control the jib. Next, the standup block and padeye that connect the mainsheet to the traveler.

I cleaned hardware some more, including hogging out wads of old caulk that resembled petrified marshmallow cream from the back of the traveler track. We worked until after dark – no matter what time we start we never seem to finish a job before sunset. I held the light while he taped off around the fittings, coated the backs and the bolts with 3M 4200 Adhesive Caulk and set each piece in place. Then he went below and put the washers and nuts on and we tightened the bolts.

Tom’s a detail guy. The gnarly, mismatched look of the old screws had made him slightly crazy, so when he requested that I make sure the x shaped indentations in the tops of the Phillips head screws all line up a certain way, I didn’t object. This little touch has no effect on the function of the deck hardware, but aesthetically the uniform look is quite pleasing.

In the afternoon of a gorgeous, sunny, but cold day, Tom began to install the traveler and then couldn’t find one of the two spacers that holds it off the deck. As usual, it was getting dark at that point. Though we searched everywhere we could think of until the light failed we didn’t find the piece and quit for the day, disappointed not to have finished.

That evening Tom started making plans to come up with a new spacer. Given the difficulty of sourcing hardware around here he was convinced that losing that part was a serious setback. I’d much rather skip the whole shopping detour, so I started making plans for a thorough search as soon as it was light.

In the morning I began at the forward berth and worked my way aft, going through every box, bin, bag, locker and cubby hole in the boat. I also took the opportunity to straighten things out, sort tools etc. I didn’t find the part inside and began to worry that I may have dropped it in the woods. When I cleaned things I sometimes rinsed them over the other side of the guard rail to avoid getting the ground wet where we worked. Searching through a small forest was not an appealing prospect. But first I searched the deck and the cockpit, saving the lazarette for last. 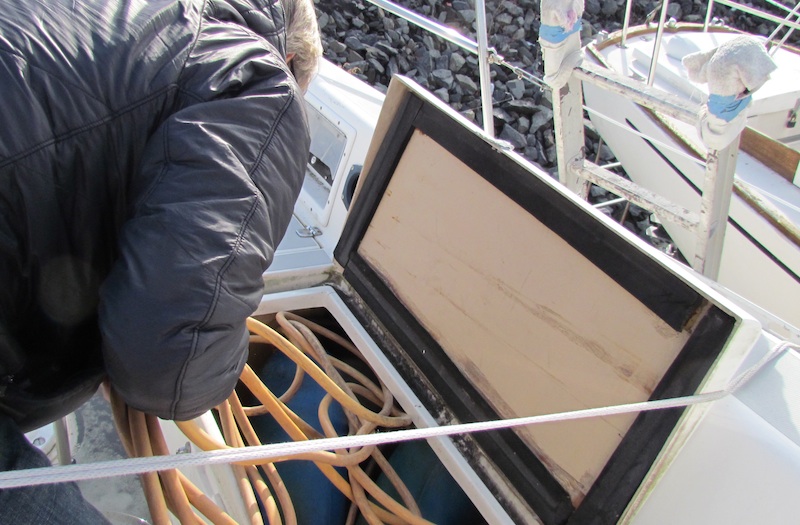 The lazarette is a wonderful thing, a huge storage cavern located under the port cockpit seat. It takes up the same amount of space as the aft cabin on the starboard side and stores lines, fenders, cockpit table, boat hook, spare anchor, emergency tiller, buckets, scrub brushes, trash bin, the refrigeration unit and water heater. It’s a merry jumble of things we constantly haul in and out depending on what job we’re doing or what equipment we need. I knew I had to pull everything out – including the trash – and go through it carefully.

I girded my loins, lifted the hasp and pulled up on the seat. And lying there on the top of the heap was that cute little spacer. I squealed with glee and handed it to Tom, who told me I was wonderful and we did a chest bump.

Tom installed the traveler, and when next it rained we sat inside snug and dry. No more chasing around with bowls and buckets catching drips. With the completion of the deck hardware re-installation project, we accomplished a large step in our quest for Endryment – that elusive, transcendent state. Life aboard Sunshine gets better all the time.