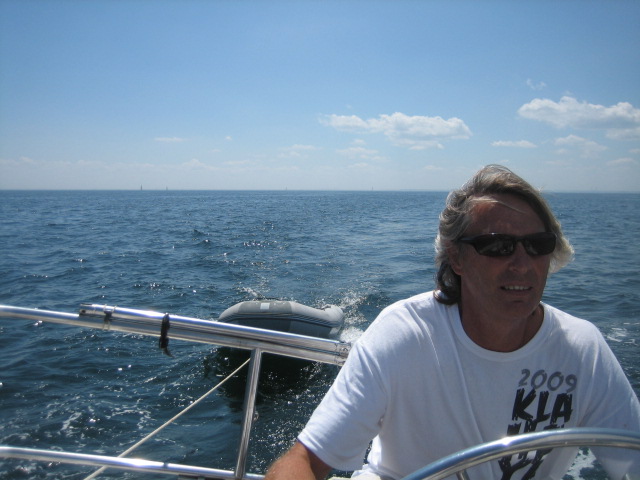 In the run up to 4th of July, the towns around Boston took turns setting off fireworks every night of the week. By the time the actual day arrived we were ready for a different kind of celebration.

We blasted away from the dock at 6:30 AM on the morning of July 4th, to sail to Gloucester with Jesse and Stacey (aboard Smitty) and Chris and Pam (aboard Wind Chaser.)

Jesse and Stacey were headed to Maine for their two week vacation. Chris and Pam were going as far as Gloucester for the weekend. We decided we’d be happy to push north for a while and see how far we could get – Gloucester? Fine. Portland, Maine? Wonderful. We just wanted to go for our first cruise. Anywhere would do.

We worked day and night to get ready, and as we cast off our dock lines, waxed poetic about what a fabulous time this was to take that next symbolic step toward our own independence.

The grins on our faces stretched wider and wider as we motored toward Hull Gut. Forty minutes later we could see Smitty and Wind Chaser just ahead of us, passing the windmill that marks the opening into open water. And then reality reeled us in when I decided to go below and check on Tito. She doesn’t much like the motor and always hides, but this time I couldn’t find her at all.

I checked all her usual hidey-holes, twice. I asked Tom to search, just in case I was having a bout of cat blindness. Between us we tore the interior of the boat apart. Tom didn’t find her either so he gave me the signal and I swung the boat around and headed back to the dock while he called Jesse to say – like some mortally wounded sidekick in a B grade movie – “you’ll have to go on without us.”

We knew what had happened. Each time we get ready to sail we go through certain routines – securing things, stowing things, putting up the table. We get excited. I’m sure we give off a vibe that Tito can read/smell/see. Perhaps she hears the tinny “thunk” when I put the jug of drinking water in the sink and knows the piercing whine of the ignition alarm cannot be far behind. She’d picked up on our plans and made her escape, her own idea of independence in mind.

She’d be hiding on Irish Pride, the old sport fisherman that’s stored a few slips over. Had we been going for the night, or even for the weekend, we would simply have called the dock hand and asked him to put out a bowl of water for her. But we weren’t sure how long we’d be gone, so we had to go back. Sure enough I found her curled up under the dash of the flying bridge, in a little nest made out of a life preserver. I grabbed the escapee and jumped back aboard Sunshine.

We were now an hour behind Smitty and Wind Chaser, so our plan of sticking together – AKA letting the more experienced sailors navigate for us – was shot. We had to get out our maps, books and charts, fire up Navionics and plot a course.

We passed out through the Gut, then zig-zagged between George’s and Gallop Islands and into the Narrows. A cruise ship was heading into Boston Harbor, and watching it pass we got our first sample of just how small we are.

There are two shipping lanes coming into Boston – the north and the south. We hustled into the triangular area between them and hopefully raised sail. But the day was entirely windless and after losing ground for half an hour we gave up sailing and settled down for the 19 miles of motoring it would take to get to Gloucester.

Wishes for a Bottomless Fuel Tank

I was nervous that our fuel supply wasn’t up to the trip. We’d filled the 20 gallon tank in December of 2012 and I couldn’t believe that our fuel gauges could be functioning if they still said Full. I knocked on the tank and it sounded hollow to me. But when I reported that fact to Tom he only told me to do the math – on a boat, diesel fuel is measured in hours the engine has been run, not miles the vehicle has traversed. By all accounts we should have at least 10 gallons left. So we pushed on. It still felt really dicey to put faith in my math. Sort of a new-agey sensation of letting the universe have its way with us.

The Seaward Side of Massachusetts 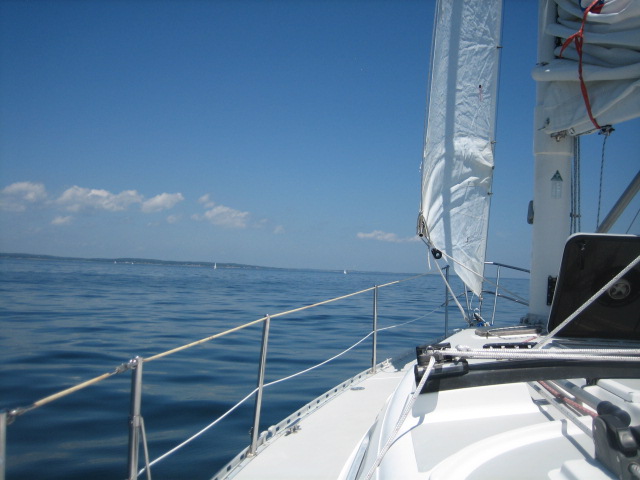 We’d driven the highway to this area several times, so knew the shoreward side of the towns along the way. Now we got to see Lynn, Nahant, Salem and Marblehead from the seaward side. At Marblehead we passed through a slow-motion, 4th of July regatta, racers flying spinnakers, trying hard to reach a puff of wind. With those spinnakers as inspiratio (and my ongoing worry about running out of fuel) I insisted on putting up the jib. And we got maybe .1 knot of help from it.

When we saw a set of three windmills in the distance we studied the chart again wondering what town we were seeing. They weren’t on the chart, though they seemed to be in the vicinity of Gloucester. But we hadn’t seen any windmills when we’d been there last fall. As we drew closer and could see that they were indeed just beyond Gloucester Harbor we decided we’d been very unobservant on our last trip to the famous seaport. Perhaps the intense scrutiny of charts that sailing requires had honed our senses. We later learned that they are new this year and felt better.

As we neared the entrance to Gloucester Harbor the wind picked up, so we decided to play in the breeze for a while. It was my first time to raise the main by myself, at sea. I managed pretty well by planting my feet on the cabin side and falling backward onto the seat, over and over again. It’s a big sail. Tom cut the engine and we sailed out past the Eastern Point Lighthouse, where we’d sat and watched the schooner races last fall.

Eating and Sleeping Independent in Gloucester

Our mooring in Gloucester Harbor was off the rocky cliff face of Stage Head, quite near the bridge that leads to the Annisquam River. Smitty and Wind Chaser were docked at Cape Ann Marina, just inside the bridge. We hopped in the dinghy and headed through the channel to join the gang for drinks at the marina then dinner at The Causeway, a seafood restaurant that came highly recommended. 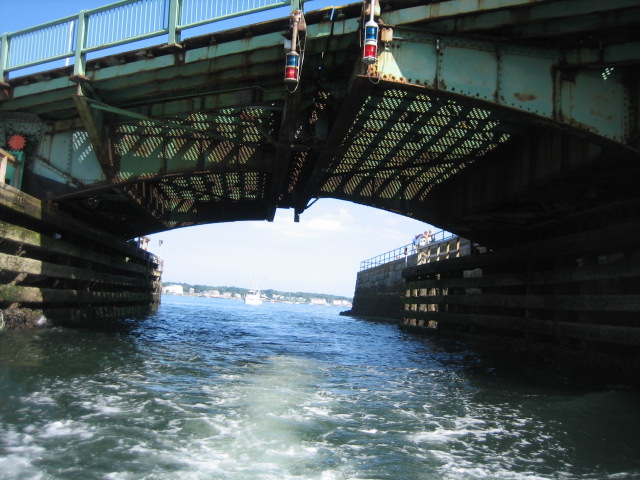 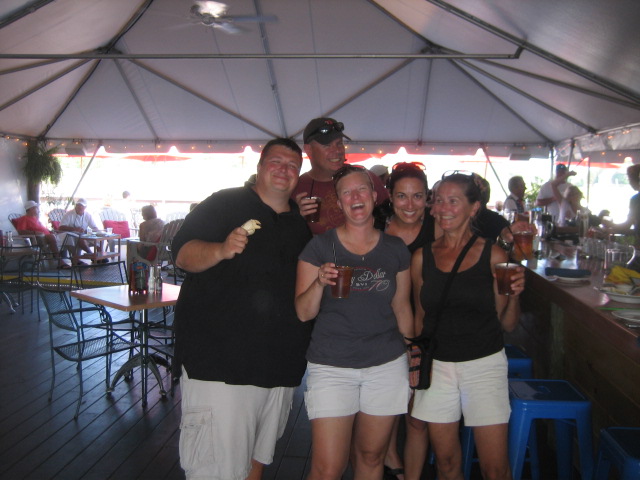 On a less blisteringly hot evening I’d also recommend The Causeway. Unfortunately the air conditioner wasn’t up to the task of cooling both kitchen and dining room on a 95 degree day. By the time dinner was over we were every bit as cooked as the food we ate. The food was way above average though, and the portions were enormous. Tom and I shared an order of tender and tasty scampi, then took most of it with us in a to go box.

Back at the marina we hung out for a bit, but I was zonked from two days of working late, the lost cat backtrack and the long trip up from Boston. Motoring takes a lot of energy. Tom reluctantly took me back to the boat, where we watched fireworks shot from shore all around the harbor.

The night was so hot that we stayed in the cockpit all night. Sleeping under the stars, alternatively rocked to sleep and woken up by the wake of passing boats – it was the perfect finale to our first day of freedom. 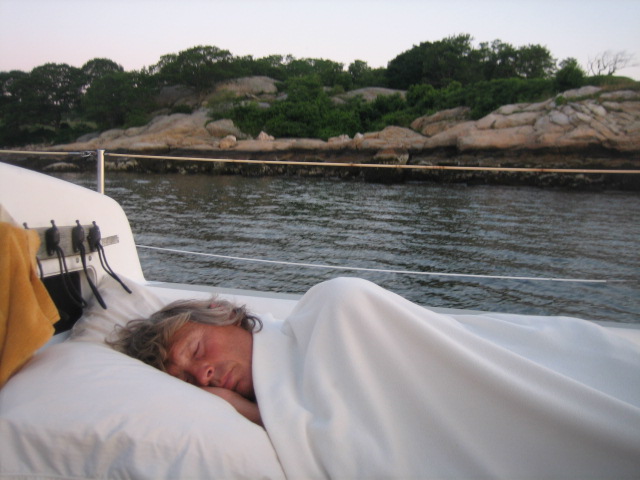