The moving aboard project isn’t all work and no play. On Saturday, after Tom put the finishing touches on his keel fairing job and I cleaned the bilge one more time (still trying to get rid of long term storage odors) we showered off the muck and gave ourselves a little time off to celebrate Labor Day.

Stacey, a new friend on the local dock, told us about the Gloucester Schooner Festival, an annual Labor Day event in Gloucester, Massachusetts. I like schooners, so we decided to run up there after work on Saturday and catch the Parade of Lights and the Schooner Race on Sunday.

It took longer than we anticipated (this is now our theme song) to clean up the work site and stow everything aboard the boat, so we were afraid we’d miss the festivities. But when we drove down the road to the waterfront, there were the lights bobbing around in Gloucester Harbor. More decorated boats were still coming through the narrow cut under the open drawbridge.

Once all the boats were through the bridge came back down and we were able to walk the entire length of the promenade. We got what we thought was a hot dog but was really linguica sausage with grilled onions and peppers from a cart that stood right beside the Gloucester Fishermen’s Memorial. Under the intent gaze of the famous bronze fisherman, we watched fancifully lighted boats prance around the harbor.

Boats were decked out in lights depicting everything from a surfing Snoopy to a palm grove. My favorite decorated vessel though was the SUP (Stand Up Paddle) board fitted with underwater lights. You couldn’t really see the board and it looked like the guy was surfing on phosphorescence.

We walked on, up and over the promontory at the eastern end of the seawall and from a little neighborhood street end beach, watched the fireworks display.

Strange People in the Night

Once the official festivities were over the private parties began in fancy restaurants and dive bars. We needed to find a place to sleep.

Our planning for this trip had not extended to looking at a map or reserving a room. We just winged it as usual, intending to sleep in the van, which Tom fitted with a fold out bed. Our fallback position in these situations is sometimes the Walmart parking lot. (The one good thing about Walmart is their welcoming attitude toward weary travelers.) But Gloucester is too smart to allow the store within city limits.

I fired up the mobile hotspot and looked for a place to camp. Not much was available in the area, none of the local parks showed camp sites. They were likely to be full anyway so we decided to drive around town, get the lay of the land, and see if we could find a nook where no one would notice us.

The center of town was still full of revelers so we headed to the fishing wharfs for a view of that side of town. From the end of one wharf we could see schooners tied up here and there, and on the next wharf over, the replica of the HMS Bounty.

Up close she was a big, imposing boat, and the web of lines hanging from her masts looked like an unfathomable tangle to our unschooled eyes. She was built for the movie Mutiny on the Bounty and also appeared in one of the Pirates of the Caribbean films. I thought she might be just a stage set but no, she’s real and really sails. (Bad night photo of Bounty is mine, all mine.)

We wandered into a convenient pub that had a deck overlooking the harbor to have a drink. It turned out to be a brewery and served only beer. Neither of us is really a beer drinker. Tom likes IPA sometimes, and I learned to like Guinness in Ireland last fall. So he ordered their IPA and I went for a stout.

Everywhere around Boston the pubs serve pumpkin stout this time of year. It sounded like a vile combination to me, but Cape Ann Brewing Company makes a Fig and Date Pumpkin Stout. That sounded pretty good. Luckily they served it in a half pint glass because it is potent and rich. Definitely a dessert beer – if there is such a thing. I drank half before it nearly knocked me out, then gave it to Tom who said it was the best beer he’d ever had. His IPA was too hoppy and perfume-y for either of us. I am now a semi-convert to the pumpkin stout camp. Or maybe to the fig and date stout camp.

That about wrapped up the night for us so we went back to our search for a deserted parking lot. We found it, quite by accident, while exploring the charming Rocky Neck area of town. Skate boarders were using the lot for some late night practice so we waited them out eating milk and cookies on a park bench overlooking a further charming little harbor.

Rocky Neck, a Great Place to Wake Up 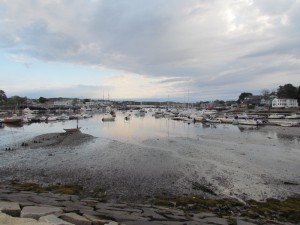 It doesn’t get much better than this. First of all there was the scenery from our beach front room of sunrise over a bay filled with assorted quaint New England water craft. Then there was the drive through narrow streets lined with artists cottages, studios and old sea port houses, after that there was the stumbling upon a schooner shipyard where the ways held the 154 foot long schooner Highlander Sea (which is for sale, if you’re in the market for a really special superyacht), and last there was the brilliant breakfast of lobster and spinach benedict at Sailor Stan’s, a tiny restaurant in the middle of the street.

Whoa, that was good.

Wait. Is this still one of our budget, bohemian trips or have I stumbled into a Sue Frause luxury junket?

And Now for the Canvas

Next on the agenda, the Parade of Sail, similar to the parade of lights, but with canvas. So we headed back into town and the waterfront promenade where we took up our station near the Fisherman again to watch the schooners that would be racing past in revue.

The sky provided the perfect backdrop with a swath of cloud making the whole scene look like a painting by John Singer Sargent, JMW Turner or the local, William Morris Hunt.

Public vs Private on the Waterfront, Again

Leaving the van near the entrance to the supposedly private Eastern Point community, we took the shuttle to the light house where the race would start. The keep out signs would interest Island Citizens for Public Beach Access. Web sites that tell how to get to the lighthouse – which is of course the property of the citizens of the United States – say to ignore the signs. I like this from the Massachusetts beach rights law page:

“MGL c.91: Waterways. Section 1 maintains the historical right of access to fish or fowl, defining “Private tidelands”, as “tidelands held by a private party subject to an easement of the public for the purposes of navigation and free fishing and fowling and of passing freely over and through the water.”

Scenes from The Schooner Race

Though I’ve been around sailing and sail boats all my life, this was the first time I’ve ever watched a sailboat race. How romantic that the boats were schooners! Though the winds were light for the big boats, the weather was ideal for those of us watching from the rocky shore – warm and breezy with a light cloud cover. Each time the clouds parted it got downright hot.

The race was divided into classes of small medium and large schooners. The winner of the large boat race was American Eagle, the medium winner was Adventurer and the small class winner was Green Dragon, named for the pub that served as the headquarters of the revolution.

Talk about revolutionaries. By daring to stay and watch the whole race we missed the last shuttle back to public property, so we had to hoof it through the private neighborhood. Though we’ve given up the land life for now, we still like beautiful architecture. What a great excuse for a closer look at the houses along the shore, including Beauport, the historic Sleeper-McCann house.

And so, all we had left to do in Gloucester was eat fish and chips. Someone in our party had the idea that the place is famous for them. Could he have grown up eating Gorton’s Fish Sticks? The frozen seafood giant is located in the center of town.

We didn’t find fish and chips though we even asked a kid at the gas station where to get good ones. The question stumped him and he just pointed to the nearest restaurant, which turned out to be packed with tourists. Not our kind of thing. We headed back out to Rocky Neck and had a fried fish dinner – close, and good, but not fish and chips. The waitress said they didn’t really do fish and chips. Another long held belief bites the dust thanks to travel.

3 thoughts on “Schooners, Skateboards and Fish: 24 Hours in Gloucester”