We finally made it out onto the water. No, that doesn’t mean we launched our boat. What it means is our new friends Stacey and Jessie took pity on us and took us sailing on Smitty, their Catalina 310.

It was a beautiful morning, nice and warm, with winds of about 12 to 16 knots. They wanted to go out early though and get back by 1:00 as the forecast was for increasing winds and small craft warnings in the afternoon. Plus we didn’t feel like we could take the whole day off work.

There’s nothing like a leisurely sail in great weather, just for fun. But we harbored an ulterior motive of learning about the channels, islands, rocks and shoals we’ll have to contend with when we sail our own boat out of Hingham. The area is rocky, with lots of places to bump a keel. Stacey keeps repeating: “just stay in the channel, just stay in the channel.” And sitting near us in the yard is the lesson she keeps pointing to, a ketch that set sail from here a few days after we arrived, bound for Newfoundland and then Galway, Ireland. The crew, unfamiliar with the terrain and channel markings, chose to go outside the markers and scraped hard on something. They had to return to the yard and haul the boat again. Now she’s awaiting repairs. We don’t want to go there.

Anyway, it was tremendous to get a reminder of why we’re doing all this work.

The wind was shifty so we sailed with the jib only and that worked well for the conditions. It also gave me the added bonus of taking pictures without having to worry about where I put my head.

The Islands of Boston Harbor

Stacey and Jessie gave us a little history of each of the Boston Harbor Islands as we passed. Peddocks, where some private homes still remain, though all the islands are now a park. Long Island, which starred as Shutter Island in the Leo DeCaprio film, and fortified Georges Island.

The Boston Light lighthouse provided a further New Englandy backdrop. Stacey pulled out a book about the islands to help answer some of our questions. I even got an answer to a question that’s been bugging me since I read Zodiac, by Neal Stephenson.

A major feature of that novel is an island in Boston Harbor built entirely of garbage. According to Stacey and Jessie, that would be a fictionalized version of Spectacle Island, which, though not truly made of garbage, has in the past served as rendering facility, den of iniquity and garbage dump. There are many layers of refuse built up there, buried now and covered in green grass and the island hosts a constant stream of tourists and hikers instead of garbage scows.

On the return trip Jessie took us through the Hull Gut, the main channel for the ports of Hingham and Weymouth. The current was with us, but the wind – which had picked up to about 25 knots – was against us, and with all the vessel traffic, the water was choppy. Coming out from behind the dodger to take a picture meant getting doused a couple of times – yep, truly a good sail.

A crew of  experienced New England sailors met us at the dock to help fend Smitty off, knowing the strong wind was going to push her sideways in the slip. 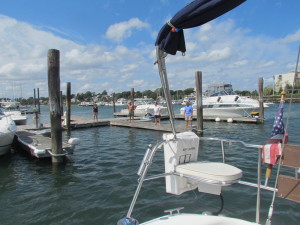 I woke in the middle of the night, woozy. It took me a while to figure out why. My sea legs had kicked in. After every voyage I spend a day or so with the feeling of still being on a rocking deck. For the remainder of the night and the next morning the land spun and made me long to get back on the water where I belong.

3 thoughts on “On a Boat and Sailing”