This is how our Freedom 30/32, Sunshine II (soon to be just Sunshine) looked when we arrived in Hingham. 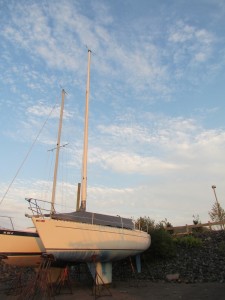 This is how she looks now. 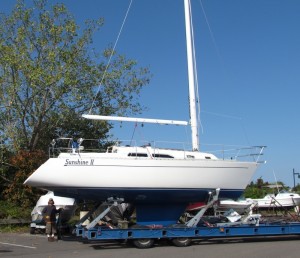 To get this far required repairing the cracked keel, fairing the keel, scraping off the old bottom paint, sanding the bottom, applying new anti-fouling paint, dropping the rudder, repairing the bearing and reinstalling the rudder. There was a bit of washing involved too. I did the washing. 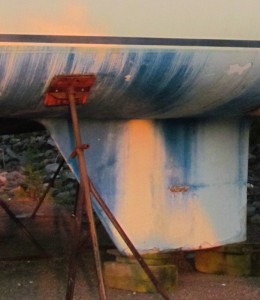 The most pressing need was to repair the crack in the keel. The extent of the damage was one of those unknowns that kept Sunshine II on the market for several years. It looked like there could be significant damage. Damaged keels are scary. We took the gamble. 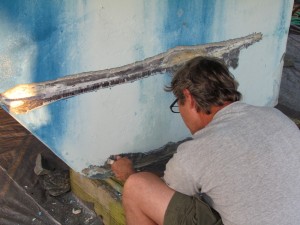 I held my breath while Tom began the demolition, chipping away the layers of loose bottom paint and cracked fiberglass. What he found was a flange at the top of the lead that created a ridge of metal where the keel joined the fiberglass stub. Overlaying this was a wrap of fiberglass. After twenty five years of sailing, that ridge had worked just enough to break the wrap. He smoothed out the lead flange, rounding it to eliminate the hard ridge so the same thing won’t happen again.

Once the crack developed, water got in and created some patches of corrosion on the lead. So Tom decided to take the whole keel down to raw lead, removing the corrosion, and gave it an epoxy protective coat, working the epoxy into the lead with a wire brush. Then he glassed the gap with fiberglass cloth and epoxy at the joint between lead and fiberglass stub and rewrapped it. 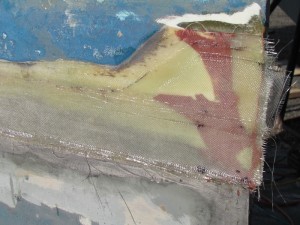 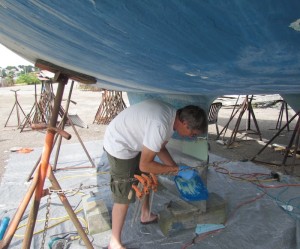 Preparing the Bottom for Paint

Through all this I could barely restrain my desire to chip away the old bottom paint. Sometimes when Tom’s back was turned I grabbed a loose hunk and tore it off. And a couple of times when he went off on some errand (like buying more fairing compound) I actually got a putty knife out and attacked a large area where the paint was clearly pulling away. The day he declared the keel done I joyfully donned a dust mask and started scraping.

About this time some folks started hauling their boats boats out of the water for winter storage. We looked at their bottoms and found that the condition Sunshine’s bottom paint was in was not all that unusual. We thought it was dire, but some of the boats around us were worse. Apparently the accepted practice is to layer up paint year after year, letting deep pits develop in areas where for some reason it won’t stick.

Well Sunshine is now clear of that hazard. As the old blue paint disappeared we were gratified to find that below that ugly, pitted paint her hull was immaculately built and faired and we had a gorgeously smooth canvas to start with.

We scratched our heads for a long time over the question of what antifouling paint to use. There are big changes coming in antifouling technology. All the paint companies are working hard to find a solution to the problem of copper, the long time favorite for retarding growth on the bottoms of boats. The copper leaches into the water and effects marine organisms. Something needs to be done, unfortunately the answer isn’t quite here yet.

Wanting to go the green (non-copper) route, I did some research into bottom paints before we left Whidbey (Washington was the first state to ban copper bottom paints) and settled on a cutting edge product called Smart Solution. It did well in tests by Practical Sailor, a magazine that provides a marine version of Consumer Reports.

But by the time we were ready to paint new information was published – a test boat in Florida painted with Smart Solution didn’t get the same results as the samples done by Practical Sailor in New England. And at the Newport Boat Show the salesman for Sea Hawk, makers of Smart Solution, actually steered us away from it after hearing that our plan was to sail south. So we had to go looking for something else.

One eco-friendly paint looked really good to us – Eco-Clad. Their advertising says, “Ever see a barnacle on a fish?” The salesman said that their paint actually produces a slippery film, much like the mucus that covers a fish’s body, that doesn’t allow barnacles and other organisms to adhere to the boat. It all sounded great, but they had no actual boat tests going yet. We were up for being guinea pigs except for two things – the cost of both materials and application was high and the surface of the epoxy paint was extremely hard. What if it didn’t work well? With that slippery coating it might not take a coat of regular paint, and getting it off would be a bi … difficult.

With time short and no affordable “green” choices available to us, we took another tack. There are two parts to the green equation, the leaching of toxins into the water, and the airborne contamination of the re-painting process. Once we chose a paint we didn’t want to have to scrape and sand again very soon. So we looked at what paints were affordable and did a good job over the long term. Once again, I went to Practical Sailor and looked at their test of bottom paints over 20 months. There were four choices that performed very well and were within our budget. One of them West Marine PCA happened to be on sale that week, and we had a coupon for another $15 off a $100 purchase, so that sealed the deal.

While I was researching and buying paint, Tom finished the last bit of sanding. Sunshine looked fabulous. Her bare white hull attracted a lot of attention, with people coming over and running their hands over the smooth surface. (Much like they do with that bubinga raised bar he made for our house back on Whidbey. He’s good with the sander, remember that belt sander race he won in early August? )

I wished momentarily that we could leave her white, but of course she’d turn green in a matter of weeks in the water.

The actual application of the paint went very smoothly once we figured out the roller covers. At the store the salesman steered me to a nappy cover that would hold a lot of paint. Meanwhile, back at the yard, Tom was talking to the owner of Irish Eyes, and learning that a thin foam cover gave a smoother finish and made the paint go farther. He tried the one I brought and didn’t like the orange peel texture that hid his glassy sanding job so he switched to a foam cover left over from the epoxy work. That worked very well and he got two coats out of one gallon of paint. Now to see how the paint performs. Next time we need to paint we hope the green options will be more solid. We’ll start a savings account soon so we’ll be able to afford one of them.

Tom Gets His Reward for a Job Well Done

Sunshine looked beautiful with her bright blue bottom. Once we were done they moved us up to the higher yard where the pretty boats go. As she was settling into her new place a yacht broker who happened to be readying a nearby boat for transport to its new owner sauntered over, checked her out and gave Tom his well deserved kudos. 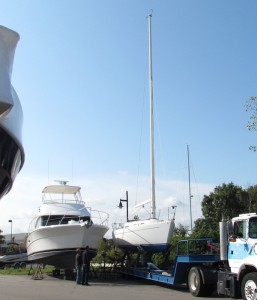 Broker: “Is this the Freedom that was down in the lower yard?”
Tom: “Yes, it is.”
Broker: “Man she looks great. I remember she was looking really rough.”

A few dings in the gel coat above the water line still need repair, but we’ll do those next season.

There you have it, photographic proof that we’re not just out here touring New England hot spots.